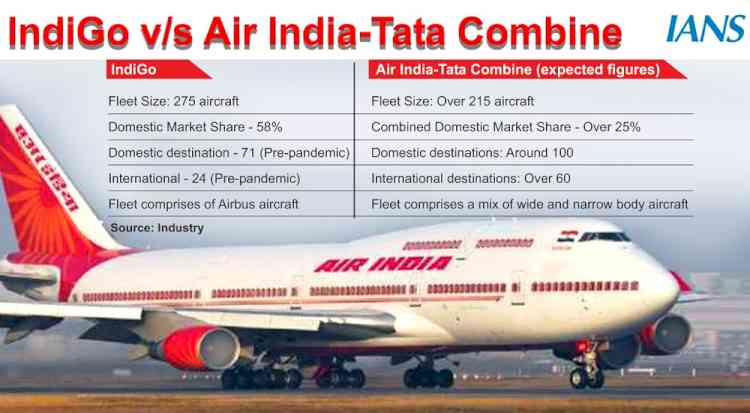 The low-cost carrier's massive fleet size, as well as expansive routes, are expected to protect its huge domestic market share.

With a 58 per cent domestic market share, the airline ferries around 6 out of every 10 domestic passengers.

It has a fleet size of 275 aircraft and operates over 1,200 daily flights

In the pre-pandemic era, the airline connected over 70 domestic and 24 international destinations.

Compare this with a likely strength of over 200 aircraft that Air India-Tata combine might posses.

Besides, IndiGo can quickly add more aircraft as it can expedite induction by around 5 planes per month.

However, its fleet has only narrow body aircraft that restrict operational reach.

On the other hand, a combine of Air India-Tata will have Air India's 117 wide-body and narrow body aircraft and Air India Express's 24.

It will also operate these aircraft on over 4,000 domestic and 1,800 international routes.

"Clearly, IndiGo has built a dominant position in the domestic airline market over the last few years and in the pre-pandemic period, it was the only airline in India which demonstrated the ability to generate a healthy level of profits," Acuite Ratings and Research Ltd Chief Analytical Officer Suman Chowdhury said.

"While the Tata Group will have the advantage of a better diversity in its aircraft fleet, it will be important for them to streamline the consolidated operations and derive the necessary synergies to be cost competitive.

"As the operational restrictions ease in the post-pandemic period, passenger traffic is set to scale up rapidly but with record high fuel costs, the ability to keep costs under control will be the key differentiator for the airlines industry," he added.

Brickwork Ratings' Senior Director, Ratings and Head, Infrastructure Ratings Vipula Sharma said: "Post pandemic, the airline recovery has been erratic. Indigo, with its relatively stronger finances will retain its market share in the medium term while the other players rebuild their operations."

"The clear structure of this market will emerge only after the economic activity along with regular business travel reach pre-pandemic levels and the Tatas firm up their strategy with the three airlines."

In a recent conversation with IANS, IndiGo Wholetime Director and CEO Ronojoy Dutta acknowledged that the competitive landscape is going to get much more intense.

"There are three potential new entrants. Most formidable force of course will be the Air India, Vistara and AirAsia (India) Alliance. They'll emerge as a strong player. No question about that."

On its part, IndiGo has three distinct lines of defence to ward-off competition, said Dutta.

"Our first line of defence is that we have the lowest cost structure in the world. Besides, our engines are getting more fuel-efficient. Then, there is our service standard and the third is our traction with the customers in terms of our network."

"Build a great network, build great connectivity and make sure you have high (on-time) frequencies between major destinations."

Furthermore, Dutta said that apart from connecting smaller towns, the airline is entering in code-share agreements to shore up its international network.

Recently, the airline entered into a codeshare agreement with American Airlines.

Daler Mehndi out with his new track 'Rola Pe Gaya'

Impact of Covid-19 on the real estate sector 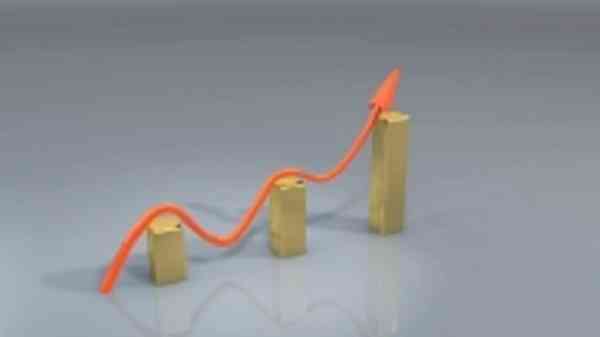 CEAT partners with Renault for launch of Renault Kiger... 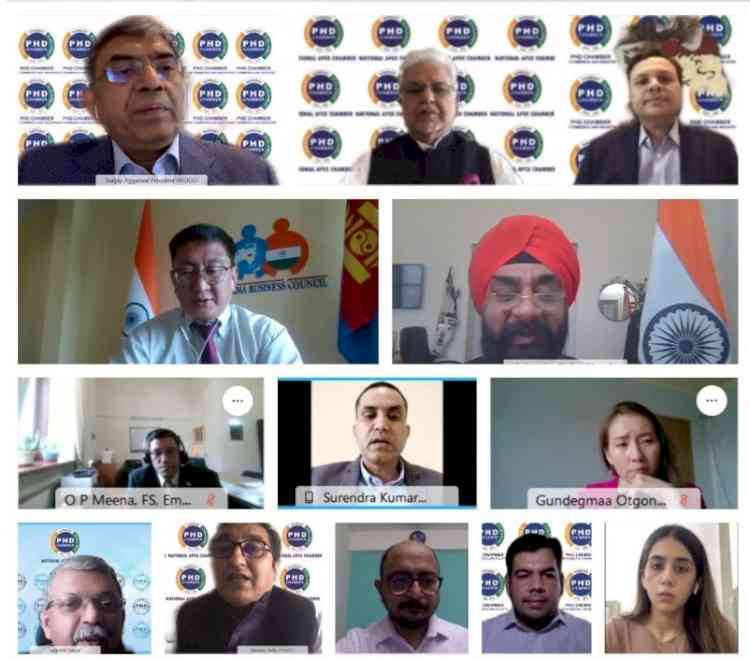 PHD Chamber of Commerce and Industry completes its 150th...