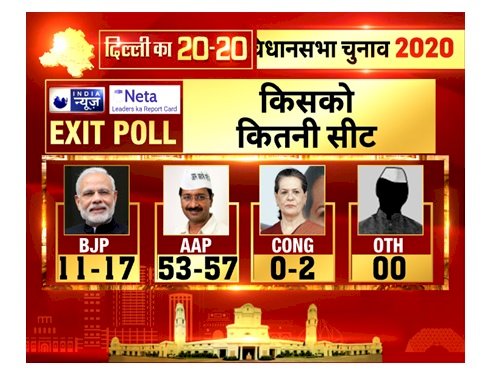 The ruling Aam Aadmi Party (AAP) is likely to be re-elected in Delhi, according to the exit poll conducted by India News-NETA App. The exit poll projected 53-57 seats for the Arvind Kejriwal-led party, the BJP is expected to get 11-17 seats. Although, it was a triangular battle but the third party, Congress, seems to be nowhere in the competition. The exit poll has predicted 0-2 seats for the grand old party. The results are based on inputs from over 34000 people across all constituencies in Delhi.

The data projected that Arvind Kejriwal would become the Chief Minister for the third time and his government’s work in the betterment of schools, hospitals, free bus rides to women, subsidized electricity and free water have been liked by the people of Delhi.

Women in slum areas crafting better world for them and...