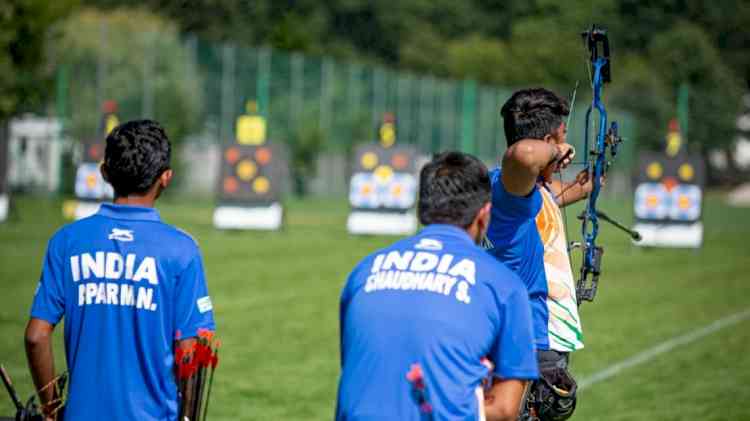 India are in for another rich haul of medals on Sunday as their archers figure in four finals and two bronze medal matches.

In the Compound Cadet Men Team final played on Saturday, India defeated USA 233-231 while the Indian Women Team defeated Turkey 228-216 in the final.

In the Compound Cadet Mixed Team final, the Indian duo of Priya Gurjar and Kushal Dalal defeated the American pair of Brielle Ochnich and Sawyer Sullivan 155-152.

In individual competitions, India bagged a silver medal with Priya Gurjar losing in the final to Selena Rodriquez of Mexico, 136-139 in Compound Cadet Women's section.

After the players were tied 28-28 at the end of the first round, Priya shot a seven on her second arrow in Round 2 and failed to recover after that and had to be satisfied with a silver medal as her Mexican rival did not make many mistakes.

In the Compound Cadet Men Team competition on Saturday, the Indian team comprising Kushal Dalal, Sahil Chaudhary, and Mihir Nitin Apar got the better of the US team of Sawyer Sullivan, Isaac Sullivan, and Nathan Zimmerman. Turkey defeated South Africa 229-220 to win the bronze medal.

The Indians, who defeated Turkey 232-230 in the semifinals, took lead by winning the first end of six arrows, 58-57. They scored four 10s as compared to three by the Americans.

The second end too went into the Indians' favour 59-58 as they shot five 10s and one nine. The Americans had an eight on the second arrow in this round and thus fell behind 117-115 after two ends.

The third end too was claimed by the Indian under-18 players as they won it 58-57 with five 10s and an eight while the Americans had three 10s and three 9s.

Though the Americans won the 4th end of six arrows, 59-58, the margin was too wide for them to overtake in six arrows as the Indians did not falter and shot four 10s and two 9s as compared to five 10s and one nine by their rivals.