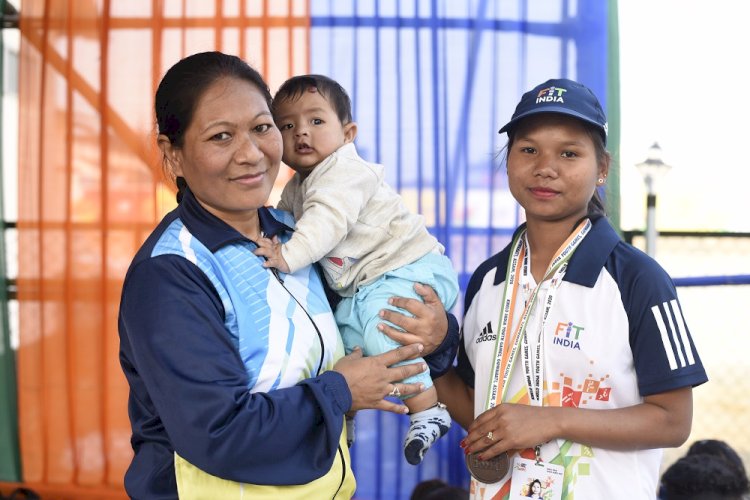 Guwahati: Assam’s Jinu Gogoi started bowling barely three months ago. That too only because she used to see her employer Bima Borah play the sport every evening at the Sarusajai Complex while she babysat her (Borah’s) 10-month-old child.

“I used to watch her play every day, and once, just on a whim, I asked her if she would teach me the sport,” Gogoi revealed. Three months from that whimsical lesson, partnering Karina Patowary, she won bronze in the Under-21 Girls pair event at the lawn bowl green in the Khelo India Youth Games here on Wednesday.

Gogoi comes from Charaideo in Upper Assam. Her mother Mamoni Gogoi works in a tea garden in Sivasagar, managed by Borah’s husband.

“After I had my daughter, I got her as a caretaker,” Borah explained, “She helps me around the house as well as takes care of the baby when I can’t.”

One of the driving motivations for Gogoi to accept the job offer was a cancer-stricken father whose treatments forced her out of school after Class X. Teary eyed, Gogoi dedicated the medal to him and resolved to put whatever reward she would get to aid his treatment.

For Borah, a member of the police, her ward’s medal was more than just reward for her own big-heartedness. She hoped that this would catapult her to greater heights.

“When I got her here I was hoping I could get her out of a tough situation and also educate her, and elevate her,” Borah said. “It may be just a bronze, but it has come after just three months of training. I can see her continuing and getting much better very soon.”

For the event itself, the venue of its debut in the Khelo Games was perfect. Guwahati is after all considered the place where India’s tryst with lawn bowls began, in 2007 with the National Championships.

Even though Assam have dominated the event at the Khelo Games, nabbing 4 medals (three golds and a bronze) over the course of three days, Jharkhand is now widely considered the hotbed for the sport in the country.

Two coaches from the contingent, Lovely Choubey and Farzana Khan, were disappointed with the contingent’s performance –two silver and two bronze for the second position in the medal tally – but were quick to pinpoint the exact reasons for this.

“They have had very little practice over the past two months,” Choubey said. “And you have to concede that home advantage is a huge thing in the sport. The Assam contingent are familiar with these greens. So it’s good they have done well.”

Jharkhand’s history with lawn bowls extends right back to 2007 itself, when these two participated in those debut nationals in Guwahati. Ever since, they have competed at Nationals, won medals and were also part of the Indian team at the 2010 Commonwealth Games in Delhi.

The reason for Jharkhand’s success in the sport? That’s fairly simple. “We were the place that got the first greens in the country. Sure, the RCGC in Bangalore is older, but not everyone can access that,” Farzana said. “In Ranchi, we got a greens in 2008. Madhukant Pathak Sir, was the one who really kickstarted the sport’s revolution in the country.”

Krishna Xalxo is another national champion and India international, part of the coaching contingent. “The availability of the greens is one simple reason of course. Also, the fact of the matter is that the sport requires an athlete to have a calm demeanour, and presence of mind. Which youngsters from our state the tribal youngsters especially, possess in huge amounts.”

Abhishek Lakhra, the silver medallist in the boys singles, epitomised that. Lakhra’s father is a caretaker of the course in Ranchi and so lawn bowls is what he has grown up watching.

“I know it looks like we have dropped our level a bit,” Khan said, “but it’s also good that other states are catching up, no? It means the sport is progressing across the country.”

Xalxo also admits that more competition will mean better quality and in turn national attention. For now, he hopes a lawn bowls player gets recognised for a national sports award soon. “That really will kickstart a national revolution.”

UPCA, Andhra and DDCA U-19 win league matches in Vinoo...

Another feather in Basketball Academy’s cap at Ludhiana