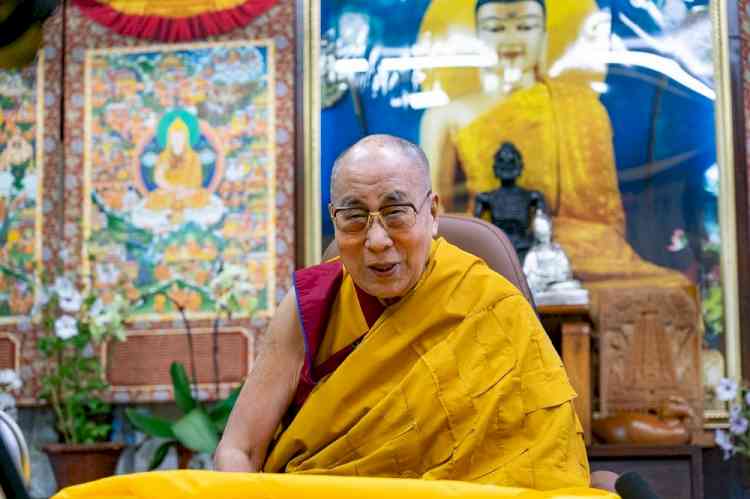 Dharamshala: His Holiness the Dalai Lama was online in conversation with members of Metropolitan police from his residence in Dharamshala late evening on Wednesday. He said, “I feel very happy and honoured to be able to speak to a group of British people like you. We Tibetans and Britishers have close historical links. On previous visits to England I’ve met people who were once posted in Lhasa.”
He said “In Asia there is a tradition of non-violence and compassion, ideas that have evolved over more than 3000 years. In today’s world these qualities seem more relevant than ever. In Asia, notions of compassion and non-violence relate more to our inner world. Generally, we observe physical hygiene to protect our health. However, we also need to cultivate a sense of emotional hygiene. We may talk about securing peace in the world, but we won’t be able to do it without achieving peace within ourselves.”
The Dalai Lama praised women rulers of the world and said, “Sometimes I observe that if countries had more women leaders, we’d have a more peaceful world. In fact, when the present Prime Minister of Finland was recently sworn in and appointed women to key posts in her cabinet, I wrote to congratulate her.”
He further added, “Scientists have found evidence that women are more sensitive to the feelings of others. Historically we see that the majority of warriors are men; even butchers tend to be men. Women represent a gentler approach. Therefore, wherever they work women should take a more active role in promoting love and compassion in relation to others.”
Regarding him The Tibetan leader said, “I always think of myself as just one of the seven billion human beings alive today. I’m mentally, physically and emotionally the same as everyone else. But I consider myself fortunate to have been able to learn about the mind and disturbing emotions.”
Talking more about his host country India the Nobel Peace Laurite said, “In India we have many spiritual traditions and generally they live peaceably together. There are Hindus, Jains, Buddhists, Sikhs, Christians, Jews, Muslims and Zoroastrians all living together here. In India there are so many religious traditions, but all teach a common message of love. The idea that there is only one religion and one truth may work in isolated countries, but in today’s inter-related world we need to recognise several religions and several aspects of the truth. Since they all convey a message of love, we can learn to appreciate them all.”
“Many people now recognise that the seven billion human beings alive today are the same in being human. We live in a global society. Global warming, for example, is not limited by any national boundaries. To meet such challenges, we need to cultivate a strong sense of the oneness of humanity. Pursuing mutually agreeable solutions when conflict arises, we must make this a century of dialogue.”
“We are social animals. Our very survival depends entirely on the community in which we live. If one person is committed to spreading the idea of non-violence it will affect the community, influencing the whole world to become peaceful and no longer violent. This is something I pray for,” said Tibetan Spiritual head.
Emphasising the need of good education he said, “Education can make all the difference. Education in the West tends to have materialistic goals so what is needed is to combine it with education about our inner world and how we can achieve peace of mind.”
His Holiness told a questioner who asked how to remain positive in the face of criticism that he didn’t know.
“Sometimes the media like to focus only on the negative because it seems to be more attractive. They take what’s positive for granted. You can explain the truth of whatever situation you’re dealing with. Even in the Buddha’s time there were many monks, but some of them were just ill-informed. In any group of people there are always some who lack good judgement.
He said , “Self-discipline is important. If you simply act out of fear of sanctions that may be taken against you, it can lead to hypocrisy. When you have the opportunity, express how you feel on the basis of your own self-discipline. If you have that, you’ll act properly whether someone else is watching or not. Take the short- and long-term consequences into account. If something seems temporarily satisfactory but harmful in the long run, don’t do it.” About his daily routine, he remarked that he’s used to getting up at 3.30 in the morning and having his breakfast at 5.30 and then to meet daily engagements.

Webinar on ‘Language of History and Language in History: An Intellectual Tradition...

HCG- The Specialist in Cancer Care launches first in India...