Idea is to get one every year: Gaurang Doshi on bagging Iconic Promising Producer Award 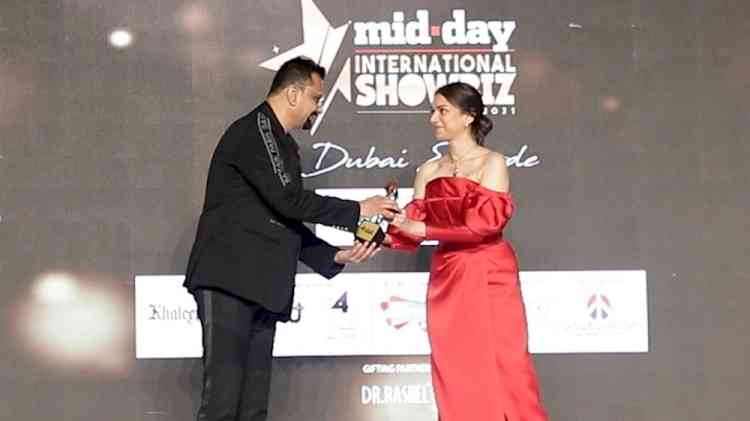 Adding a brand new shining and glittering trophy to his already prolific and outstanding award collection, Gaurang Doshi has been honoured with Mid-Day International Icon Awards held in Dubai.
Gaurang Doshi has been honoured with Iconic Promising Producer Award for his remarkable achievements and future endeavours. The two days awards ceremony was held in Dubai, honouring cinema stalwarts for their remarkable achievements.
Beautiful and graceful Aditi Rao Hydari presented the award to Gaurang, at a magnificent ceremony at the Grand Hyatt Hotel in Dubai. Entire Bollywood Brigade, ranging from actors, actress, producers and movie making giants graced the event.
Talking about his award win, Gaurang Doshi, “It feels great to be acknowledged for your hard work. I wouldn’t gloat and say, I have 4 Limca Book Awards, but be humbled and keep on winning one each year. Despite pandemic, I have excelled in my field and kept moving forward with various projects for different streams. I'd like to express my gratitude to fans. Without their love and support, nothing is possible”
Gaurang Doshi also confirmed that there are a series of projects in the pipeline; web-series and movies, at different level of production.
When asked about his future projects, Gaurang, “Lockdown has changed the way audience consume content and filmmakers are adapting to his new way. I have massive projects in the pipeline for OTT, these  are currently at different stages of production and I will be making big announcement pretty soon”
Digital Arena is my aim; I plan to conquer it with series, movies and whatnot for everyone and every language. Indian cinema is shifting its landscape, and I will be the first to make a mark as I have been working tirelessly for some time now. I will be bringing stories to foray which are relevant and relatable as well” added Gaurang.
Gaurang Doshi is known for producing iconic films such as Aankhen, Deewaar and Sandstorm. He is currently collaborating with business tycoon Madhu Shekhar Bhandari in running SatoshiFX, a crypto-trading company, which has turned over a billion dollar in terms of business.

Nishant Malkani and Nyra Banerjee to pair together in Rakshabandhan-...

How will Veer and Bantu trap aliens on Sony SAB’s Hero:...