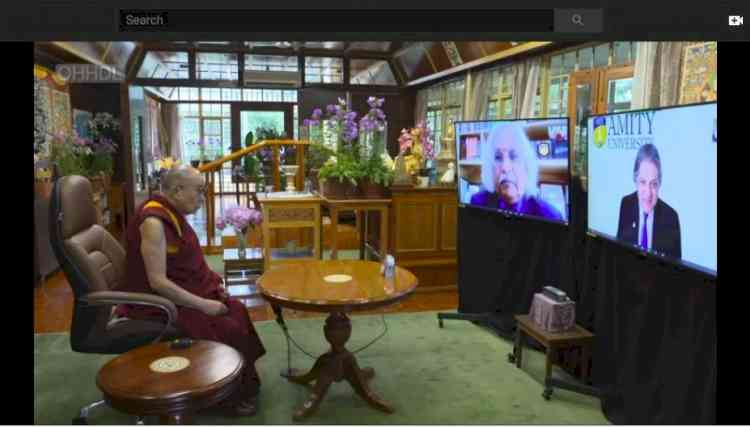 Gurugram: At a time when the whole humanity is fighting a war against Corona Pandemic and trying to combat the fear of death, Nobel Laureate of Peace His Holiness Dalai Lama called for “Creating a Compassionate and Peaceful World’ at the Amity Eminent Webinar Lecture organized by Amity University Gurugram. Recalling the great traditions of education and scholarship of Nalanda University Dalai Lama said that “Meditation was an integral part of pursuit of knowledge” at Nalanda. That is why the science of mind cultivated at Nalanda enabled the seekers of truth to have Karuna(Compassion) and Shanti(Peace of mind). Taking immense pride in the ancient wisdom of Indian spiritual Vedic Civilization Dalai Lama said that though his body is Tibetan, his mind is nurtured with the Buddhist thoughts which have their roots in the ancient Indian wisdom.
Overwhelmed by the Indian generosity, His Holiness also expressed his gratitude towards the magnanimity of Indian government for allowing His Holiness to stay in India as the longest guest so far.  Adhering to the strictly chalked out schedule, encompassing an hour of discourse, His Holiness Dalai Lama, inspired the spell bound audience of large number of Vice Chancellors, Senior Scientists, faculty members and 5000studentsparticipants connected to the webinar live and great many more who watched the live webcast on Amityyoutube. The keynote lecture was also webcasted in 12 languages live including Hindi, Tibetan, Chinese, Vietnamese, Russian, Korean, German, French, Italian and Japanese through the official website of His Holiness dalailama.com.
Expressing his concern on the dichotomy of science and spirituality, His Holiness Dalai Lama said “In the ancient tradition of Tibetan Buddhist thought the Science and Spirituality were cultivated hand in hand and thus the capabilities of science were utilized to create a world full of divine bless. We find this tradition continuing in the Gurukuls of Nalanda”. Today we find that the modern education has delinked itself from the pursuit of spirituality. It is this which is the cause of all problems that has created a divided world. His Holiness called for creating one humanity by spreading the message of love, peace, harmony and compassion through education at all levels.
His Holiness further expressed the view that “Considering India is a country that has lived up to its democratic system of governance, being the second largest populous country in the world with freedom of press and right to speech as enshrined in the Indian Constitution, where as these two rights are completely infringed  in China,  India shall immerge as number one in the world in respect of preserving harmony between religions and oneness of vast diversity and a leader of the world community to create a compassionate and peaceful world that shall thrive on the cardinal principals of peace, non- violence, tolerance and compassion”.
Responding to a question from a young student How to overcome dispersion in the age of uncertainty and pandemic crisis? Dalai Lama said “Fear is our greatest enemy. We should concur fear by reducing anger and avoiding negative emotions. As negative emotions based on personal experiences create negativity and drive us towards fear”. His Holiness further addedthat our ancient traditions also inspire us to reduce our attachment to the material world as more than often fear originates because of our attachments.
Expressing his immense delight and great reverence to His Holiness Dalai Lama, Founder President of Amity Education Group Dr Ashok K Chauhan said that in “Amity University campuses, both in India and abroad, ancient Indian values of Aatmiyata, Compassion, Tolerance and Harmony are nurtured to inculcate the spirit of humanism in out student community alongside empowering them with great capabilities of modern science and technology”. The Chairperson Dr Amita Chauhan also expressed her gratitude towards His Holiness.
The Webinar was also graced by Chancellor of Amity University Noida Dr Atul Chauhan, Hon’ble Chancellor of Amity University Haryana Dr Aseem Chauhan, President ASTIF Dr W Selvamurthy, Group Vice Chancellor of Amity Dr Gurinder Singh, President of Amity Board of Medical Sciences Dr AK Nagpal, Former Director of IIT Roorkee and IIT Delhi Prof Premvrat, Vice Chancellor of Subharti University Col NK Ahuja and Vice Chancellor of Amity University Gwalior Lt Gen VK Sharma among others.
The Webinar was moderated by eminent academician Prof PB Sharma, Vice Chancellor of Amity University Gurugram who is also the past President of Association of Indian Universities and was coordinated by Dr. Sanjana Vij.  Dr JS Sodhi Vice President Amity IT Division and his team provided excellent technical support for the conduct of the webinar. /(June 26)