Hyderabad takes on Odisha in  crucial tie at Fatorda 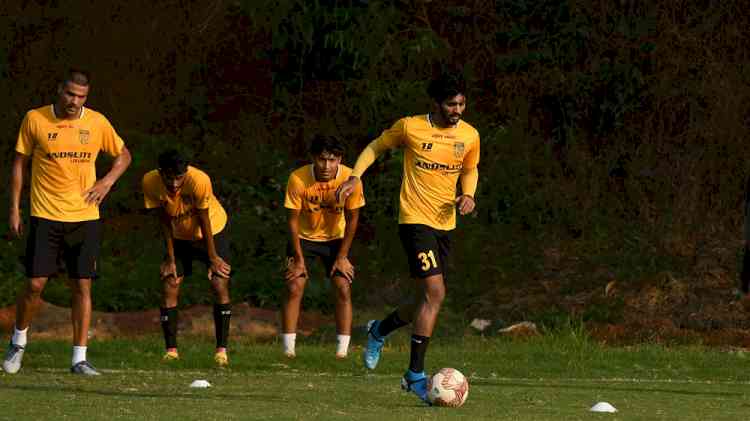 Panaji, Goa: Just two days after a confidence boosting performance against Mumbai City, Hyderabad FC are back in action when they host Odisha FC, at the Jawaharlal Nehru Stadium in Fatorda, on Tuesday.

The two sides faced each other in the first game of the league season as Stuart Baxter’s Odisha were beaten 1-0 by HFC, thanks to a penalty from Aridane Santana. Since that game, Odisha have picked up just six points, and find themselves at the bottom of the league table going into this Round-12 clash.

But that result will not matter when the two sides face off on Tuesday, claims HFC Head Coach Manolo Marquez. “The last time we faced Odisha, it was a really different game. We were maybe the better side, but needed a penalty to win and anyone who follows this league will know that anything can happen tomorrow,” said Manolo, on the eve of the clash.

Baxter’s men have had some unlucky results in recent weeks, but have lost just two of their last five league games. Diego Mauricio, who now has six goals to his name, has been in fine form while Steven Taylor and Cole Alexander have been ever present.

The likes of Jacob Tratt, Jerry Mawihmingthanga, George D’Souza, Vinit Rai and Manuel Onwu are all capable of turning things around and are sure to pose a threat to Hyderabad, in this tie.

“Odisha are surely playing better in the last few games. They do not deserve to be where they are in the table, and I expect them to give us a tough fight tomorrow,” said Manolo, speaking about his opponents.

Hyderabad, on the other hand, put in an inspired display against Mumbai City in a game where they dominated the hosts and could have easily taken all three points. This followed back-to-back victories over Chennaiyin and NorthEast United, so they will be confident going into the game.

However, Manolo believes that his side cannot rest on the previous results and need to be at their best on the night on Tuesday. “The results in the past do not count for much. They are not very important as of now. What is important is how the team plays tomorrow and that is all I am concerned about at the moment,” he added.

The likes of Liston Colaco, Joel Chianese and Aridane Santana had their chances against Mumbai but failed to take them. The addition of Roland Alberg will also give them some impetus in attack.

Speaking about injuries, Manolo said, “We have had just two sessions since the last game. At the moment, the players who were unavailable in the last game, remain on the sidelines.”.

Odisha beat Kerala before playing consecutive games against Chennaiyin, where they managed to take just a point. Hyderabad, on the other hand, have taken seven points from their last three games and will want to build on that form, going into this clash.

However, with games coming thick and fast, Manolo wants his side to stay grounded and take one game at a time. “We have to work hard again. We have games against Jamshedpur and Bengaluru coming up but right now, our focus is only on the game against Odisha and we want to do as well as we can in this game.”

The game kicks off at 7:30 pm on Tuesday and will be telecasted live on the Star Sports Network with live streaming on Disney+ Hotstar and JioTV.

Afghanistan Cricket Board hints at inclusion of women in...