Hyderabad take on Chennaiyin FC in first game of 2021 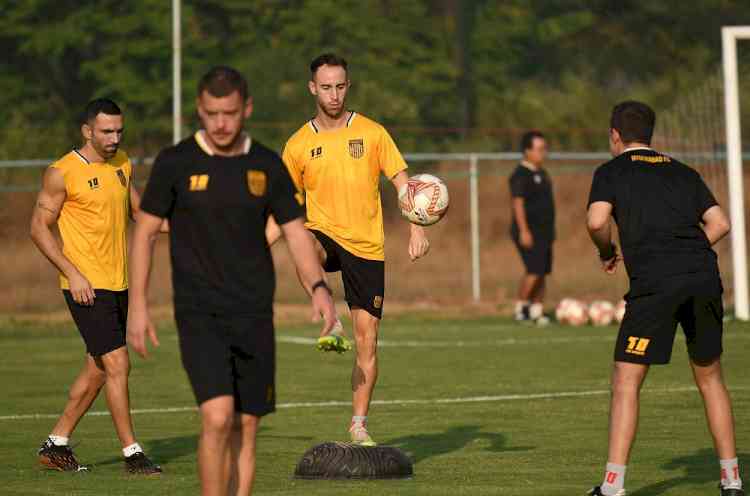 Panaji, Goa: After a run of unlucky results, Hyderabad FC are back in action, when they face Chennaiyin FC at the GMC Stadium in Bambolim, on Monday night. Playing their first of seven games in the month of January, Hyderabad, who are currently eighth in the standings, will want to put in a stronger performance in this game, to move closer to the top-4 spots.
Chennaiyin, who are seventh in the league table, just a point above Hyderabad, have been in decent form lately. They are unbeaten in the last four games heading into this clash and will pose a strong challenge on Monday.

“Chennai have a really brave coach and are a dangerous side, with a lot of quality players all around the field. I was really impressed by their performance in the first half against FC Goa and I am sure they will be a tough side to play against, tomorrow,” said Manolo, speaking about the game ahead.

Csaba Laszlo has a strong squad at his disposal. He could miss the services of Rafael Crivellaro who is doubtful for Monday. But the manager has a good mix of Indian talent and foreign experience to choose from.

Lallianzuala Chhangte, Eli Sabia, Enes Sipovic, Anirudh Thapa and Jakub Sylvestr have all played a crucial role in the recent results for Chennaiyin and could be the danger men for Hyderabad in this game. The return of Esma Goncalves (Isma) will also provide the coach with some options for his starting XI.

“Like a couple of other teams in the ISL this season, I think Chennaiyin deserve more points than they have on the league table. They have a strong attack and are dangerous in set-piece with the likes of Sabia, Sipovic, Deepak Tangri and Memo ready to cause problems to the opponents,” said, the HFC Head Coach.

Manolo Marquez, on the other hand, has players returning from injury. The HFC Head Coach is yet to name a Starting XI with five overseas players since the second-round clash against Bengaluru, but against Chennaiyin, he does have an option to start up to five of them and we will have to wait to see how he sets up his side.

The likes of Joel Chianese and Lluis Sastre played a half each against FC Goa in the last game while Fran Sandaza has looked lively, coming off the bench in the last two games. With the additions of these players, Hyderabad will aim for a stronger performance against their South Indian neighbors.

However, Manolo revealed that two of HFC’s players may yet miss the game on Monday. “Nikhil (Poojary) is not ready to play. Liston (Colaco) can play, but he is not 100% and we need to assess the risks involved in playing him, before we can include him in the squad,” he said.

With both teams just a couple of good results away from breaking into the top-4, this game is a real chance for either side to not only start the new year with a positive result but to make sure that they can push for qualification, come the end of the season.

“Football is an unpredictable game. Yes, things did not go our way in the last few games. So, maybe there will be a few tactical changes against Chennaiyin,” said Manolo, when asked about his side’s preparations for this game.

The game kicks off at 7:30 pm on Monday and will be telecasted live on the Star Sports Network with live streaming on Disney+ Hotstar and JioTV.

Around 80,000 Tibetans exercising their franchise in first phase of poll for Tibetan-Government-in-Exile

The Khelo India University Games will be big boost for...

Pandemic disrupted careers of many sports personnel, but...