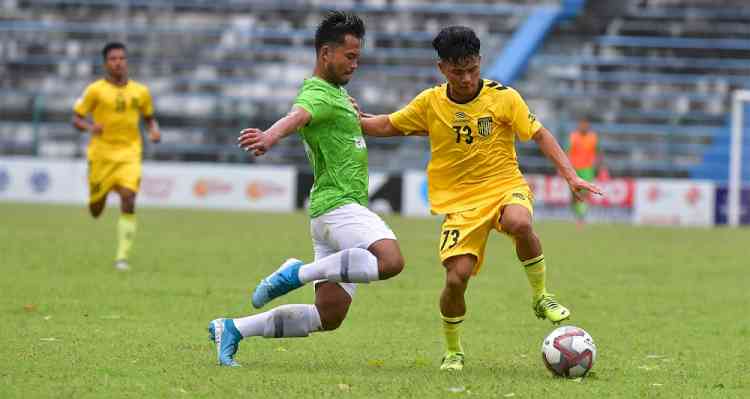 Kolkata, September 16, 2021: After a superb start to their Durand Cup campaign, the young Hyderabad FC side put in a valiant performance against the 2019 Durand Cup Champions Gokulam Kerala but fell to a 1-0 defeat at the Kalyani Stadium on Thursday.
The first half saw Hyderabad go toe-to-toe against the 2020-21 I-League winners as the two teams failed to find the back of the net in a goalless half of football.
After the restart, Shameel Chembakath’s side were dealt a blow in the first minute as Rahim Osumanu scored from close range. Lalbiakhlua Jongte pulled out a superb save from the initial shot but was helpless with the second as Hyderabad went a goal down with the whole half to play.
But they were given some hope when a reckless Emil Benny picked up a second yellow just minutes after the goal, leaving the Malabarian’s down to 10 men.
Hyderabad managed to create a couple of decent opportunities but niggles and cramps to players around the field deflated any momentum the youngsters managed to create. Gokulam Kerala managed to hold on in the end as there was just a goal separating the two sides on a tiring afternoon.
The youthful Hyderabad side failed to find parity and fell to their first defeat of the 2021 Durand Cup. This result also sees the team drop to 3rd in the points table, behind Army Red (4 pts) and Gokulam Kerala (4 pts) with one more game to play in Group D.
Hyderabad play Army Red in the decisive game next Sunday, September 19.

Appointing Dhoni as mentor is not to undermine anybody:...

Patiala and Amritsar to compete in finals of PCA Inter...