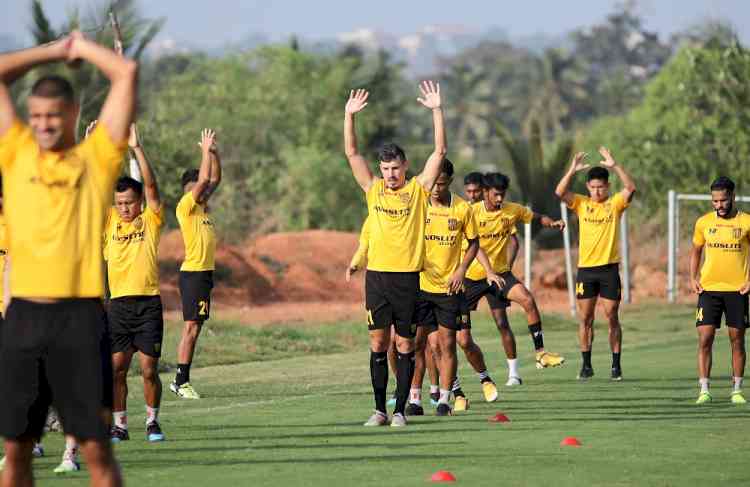 Panaji, Goa: After coming back from two goals down to register a dramatic draw in the last round, Hyderabad FC are back in action in less than three days, when they host Chennaiyin FC at the Tilak Maidan in Vasco, in an early kick-off on Sunday.
Manolo Marquez’s side put four past Chennaiyin in a comfortable victory the last time these two sides met, earlier in the season. But with top-4 qualification on the line, we can expect a close-fought contest in this Round 15 encounter. Incidentally, this will also be the seventh game for Hyderabad in the hectic month of January, and the fifth in the last fortnight.

“Maybe Chennaiyin will go into this game looking for revenge after the 4-1 score line from the previous leg. In football, anything can happen and I am sure this game will not be the same,” said Manolo, speaking ahead of this crunch clash.

Csaba László’s men come into this game after a confidence boosting draw against league leaders Mumbai City. They have an in-form Esmaël ‘Isma’ Gonçalves and Jakub Sylvestr leading their attack while the likes of Lallianzuala Chhangte, Eli Sabia and Anirudh Thapa have also been impressive in the last few games.

Isma, who has scored each of the last three goals for the club, came on as a late substitute when the two sides faced off earlier this season and his form in front of goal could be a cause of concern for Hyderabad in this tie.

“From what I can see, Chennaiyin have changed a few things in attack and also have a couple of crucial players back available. They also had six days to rest while we had less than three. This is not an excuse, but that can surely make a difference,” added the HFC Head Coach.

Hyderabad FC, who have a chance to leapfrog FC Goa in the 3rd place, saw late goals from Aridane Santana and Fran Sandaza secure a point against Bengaluru in the last round. The likes of Halicharan Narzary, Joel Chianese, Liston Colaco and Mohammad Yasir have all been consistent for Marquez’s side this season and will hope to put in a similar performance on Sunday.

The center-back pairing of Odei Onaindia and Chinglensana Singh could have their work cut out against the Chennaiyin attack.
However, Hyderabad will still be without the services of Nikhil Poojary and Souvik Chakrabarti for this game as well, Manolo revealed, ahead of this tie.

“This game is a chance to add three points to the tally, not just for us, but for Chennaiyin as well. They can go level on points with us, but our aim is to try and put some distance between us and teams trying to break into the top-4,” added Manolo.
With a win in this game, Chennaiyin can match the points tally of HFC, who currently sit fourth in the league table. But a chance to break into the top-3 and extend their unbeaten run will be on the minds of Hyderabad, when they take on László’s side.

Ashwani Kumar awarded for his continuous 27 years services to PU