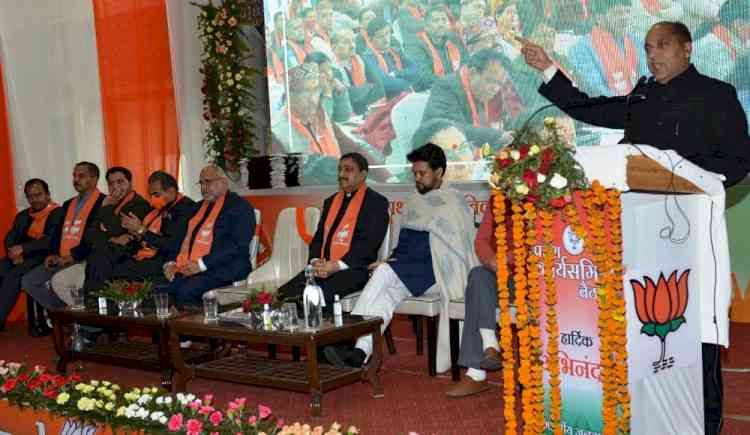 Dharamshala: While addressing the concluding session of State BJP Executive Committee meeting at Dharamshala, Chief Minister Jai Ram Thakur said that the present State Government has launched about fifty new schemes for welfare for the every section of the society and development of every area of the State.

Chief Minister said that the Covid-19 pandemic apart from affecting the world economy also affected the organizational works of the Party. He said that now steps would be taken to work with greater dedication to strengthen the party at the grass-root level. He said that credit of landslide victory of BJP in Lok Sabha elections, by-elections to Vidhan Sabha and thereafter victory of BJP supported candidates in PRIs and ULBs elections was possible due to the hard-work and dedication of the party workers. Chief Minister said that the people of the State gave their wholehearted support to the State Government and ensured landslide victory of the BJP candidates in all the elections held in the State since the last three years. He said that this winning streak should continue for years to come. The Chief Minister urged the party workers to ensure that the BJP Government comes again to power in 2022 Assembly Elections.

Jai Ram Thakur said that the ‘Digital India’ concept of the Prime Minister Narendra Modi in 2014 came as a blessing during the lockdown due to covid-19.

He said, “The opposition in the State is directionless, leaderless and issueless political party. The Congress leaders were desperately trying to find an issue against the State Government in a bid to remain politically alive.”

He said that the Himachal Model was today being appreciated even by the Prime Minister, Home Minister and National BJP President. He said that the initiatives like ‘Panna Pramukh Sammelan’, ‘Tridev Sammelan’ etc were being adopted by other BJP organisations in several States.

Yoga college to host webinar on peace, positivity and prosperity

Families will get information about the health of Covid...