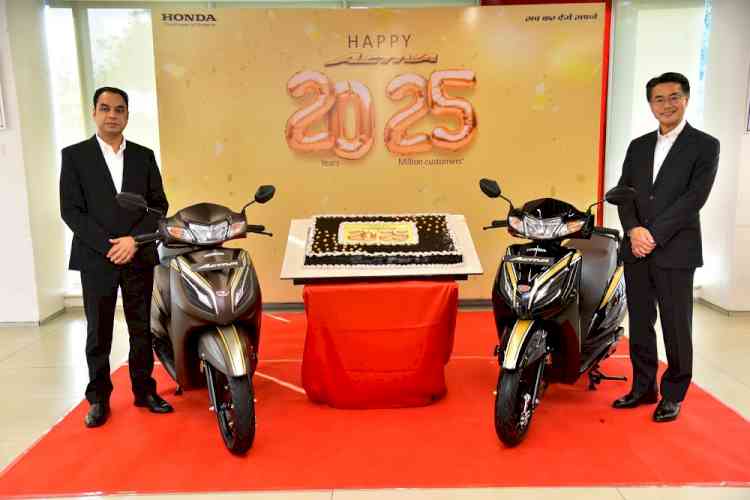 Noteworthy, 20 years ago when the scooter market in India was fast declining, Honda made its solo entry with its first two wheeler - the 102cc Activa in 2001 and the rest is history! Over the years, Honda’s Activa brand accomplished many milestones on its way to achieve this remarkable feat in its latest BSVI avatar.

Activa’s journey of giving Wings to 2.5 crore Indian families & Activating India
India’s love story with the Activa has only gained strength with every generation. In just 3 years of its debut in 2001, Activa became the undisputed leader in the scooter segment by 2003-04. The next 2 years saw it cross the 10 lac cumulative customers’ milestone too.

Powered by true technology leadership and evolution ahead of times, it took the Activa brand 15 years to achieve the initial 1 crore customers in 2015. As scooter acceptability continued to rise, Activa brand accelerated the Activation of India on the move, and become the first choice of India families. Such is the popularity of the brand that the recent 1.5 crore customers were added with 3 times the speed i.e. in just five years.

Expressing gratitude on achieving this historic milestone, Mr. Atsushi Ogata, Managing Director, President & CEO, Honda Motorcycle & Scooter India Pvt. Ltd. said, “Since its launch in 2001, be it the 100-110cc engine or the new more powerful 125cc engine, the secret of success of Activa family is Leadership that builds Trust. Since 20 years, Activa is at the forefront of technological innovation, sometimes even decade before it became the industry norm. Be it the Honda patented tuff-up tube and CLiC mechanism in 2001, Honda’s Combi-brake system with Equalizer in 2009, revolutionary Honda Eco Technology (HET) for 10% mileage up in 2013, or even the smarter HET PGM-Fi engine powered by eSP and World First Tumble flow in BS-VI era; every generation of Activa brand continued to evolve, revolutionize the scooter segment and Activate India. We are happy to see that India’s love for the legendary Activa continues to reign supreme.”

Sharing the uniqueness of Activa brand’s 2 decades’ journey Mr. Yadvinder Singh Guleria, Director – Sales & Marketing, Honda Motorcycle & Scooter India Pvt. Ltd. said, “Very rarely does a two-wheeler transcend from just utility to an emotion which stirs and resonates with the soul of society, like Activa has. So much has changed around us during this period, but Activa still continues to remain the first love of Indian families, when it comes to buying purchase a scooter. As generations grew from infants on pillion to first time riders, from the empowered first time women rider to the savvy grandparents living it up; Honda is proud that Activa brand has been intrinsic to the activation of this great nation. Many of our Customers share their cherished memories over every generation of Activa. Thank you India 2.5 crore times over, for making Activa the gold standard of your everyday ride.”

Bank of Baroda enters into MoU with Mahindra & Mahindra...