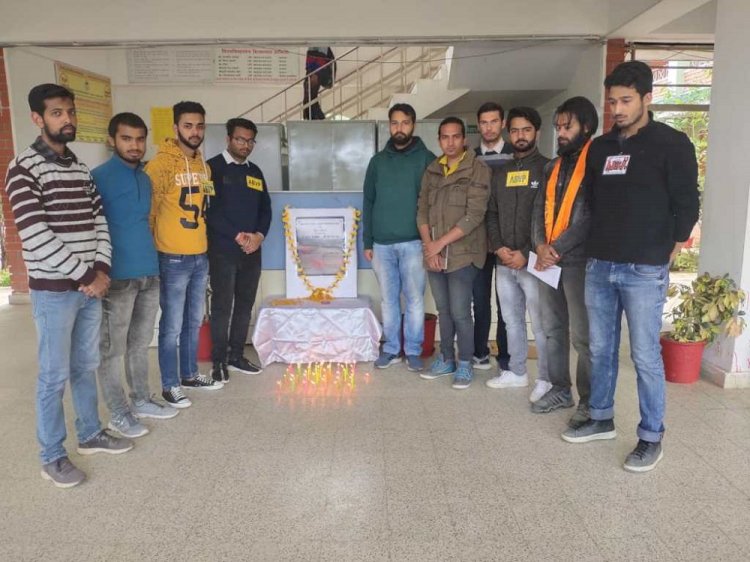 Dharamshala: Himachal Pradesh Central University is again in discussion, In wake of the unnecessarily delay in the construction of permanent campus of HP Central University HPCU. A condolence meeting was organized by the Akhil Bharatiya Vidyarthi Parishad (ABVP) at the Central University’s (CU) Shahpur Campus and a 5-minute silence was observed and candles were also lit.

Unit President Sahil Rana said that a year ago, on 21 February 2019, the foundation stone of the Central University Permanent Campus in Dehra and Dharamshala was laid by Union Minister Prakash Javadekar and State Chief Minister Jairam Thakur. That time was a very happy time for the Central University”, said Rana.

He added that even after 1 year, the construction work of the Central University did not start, therefore, today, a condolence meeting was organized in the Central University Shahpur Campus. Rana said that it was a political hypocrisy of the central and state government that the foundation stone was laid at the time of elections but nothing has started till today. Till now, student organizations have been agitating for the construction of permanent buildings of CU. From last Monday the agitating students have locked all the three premises of CU in Dehra, Shahpur and Dharamshala, to give strength to their agitation.

On 21st February 2019, the foundation stone of the buildings of the Central University in the state was laid by the then Union HRD Minister Prakash Javadekar in Dehra and Jadarangal. Approval has been received from FCA for construction of CU buildings in Dehra. Whose DPR was also sent to the Ministry of Human Resources. On September 23, the Ministry of Human Resources cancelled the DPR of Dehra campus due to excess budget. Now, the new DPR has been sent to the Central Government. Of which, from 1410 crores, the budget has been kept around 500 crores.

Central University of HP was announced on 21st February 2009, with its base at Dharamshala but the construction of the building has been hanging for last 11 years.

The Central University in Himachal is stuck in the internal political turmoil of the BJP and Congress. Former Chief Minister Shanta Kumar and Vir Bhadra Singh wanted  to build the main campus in Dharamshala, while Union Minister Anurag Thakur is bent on taking it to his parliamentary constituency at Dehra.

The Central Government approved 13 Central Universities in 2009. Of these 12 have been completed, but till now HPCU is lying in files in Himachal. The then Chief Minister Virbhadra Singh approved 700 acres of land to be built in the main campus Dharamshala. Later during CM PK Dhumal regime  there were plans to build another campus of HPCU  in Dehra. Due to this fight, the DPR of the project could not be made even in the last 11 years.

Revamp of footpaths in full swing at PU