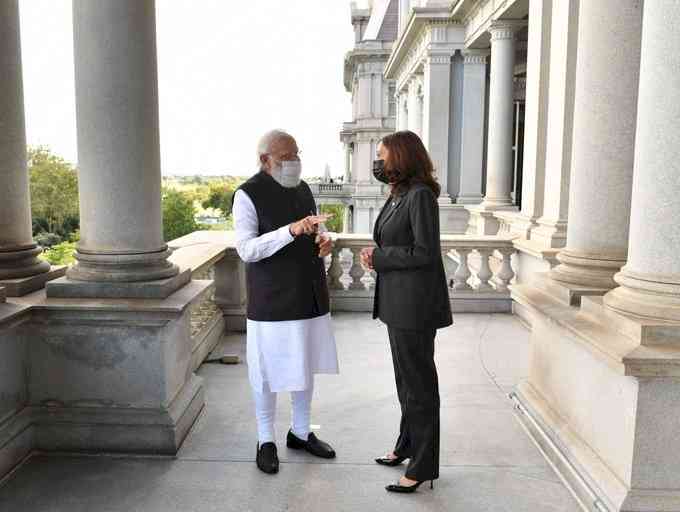 New York, Sep 24 (IANS) US Vice President Kamala Harris has told Prime Minister Narendra Modi that she was asking Pakistan to act on terrorism and ensure that terror groups do not target New Delhi or Washington, according to India's Foreign Secretary Harsh Vardhan Shringla.

He said that when the issues of terrorism came up during their meeting on Thursday, "the Vice President suo moto referred to Pakistan's role in that regard. She said that they were terror groups that were working there. She asked Pakistan to take action so that these groups do not impact on US security and that of India".

Shringla asserted that "she agreed with the Prime Minister's briefing on the fact of cross border terrorism, and the fact that India had been a victim of terrorism for several decades now, and on the need to rein in and closely monitor Pakistan's support for such terrorism".

Briefing reporters in Washington after the meeting between the two leaders, he said that the encounter, the first in-person meeting, "reflected warmth and cordiality".

The discussions were "substantive" and also covered the Covid-19 pandemic, climate change, cooperation in the technology sector, cybersecurity and space, he said.

A White House readout of the meeting said that Modi and Harris "supported expanding bilateral security cooperation in the face of modern threats, including terrorism and cybercrime".

Harris, who is the chair of the National Space Council, "encouraged expanded US-India space cooperation, and she and Prime Minister Modi explored ways to build on existing, robust bilateral collaboration on space", the readout added.

Some of the supporters of Harris and her Democratic Party have accused Modi of eroding democracy.

The readout pointedly said: "They each emphasised a commitment to democratic values and discussed the need to strengthen democracy at home and abroad."

The Indian External Affairs Ministry's readout did not mention any discussion of democracy.

When the topic of the pandemic came up, they discussed collaborating on vaccine production under the Quad Vaccine Partnership, the White House readout said, adding: "The Vice President welcomed India's commitment to resume vaccine exports and the progress of its domestic vaccination campaign."

The White House's account of the meeting made no mention of Pakistan's role in terrorism or asking it to take action against terrorists.

The Indian readout said that Modi told her "about India's push for increasing renewable energy and the recently launched National Hydrogen Mission".

"He also emphasised the importance of lifestyle changes to promote environmental sustainability.

"Both leaders acknowledged the vibrant people-to-people linkages as the bedrock of the mutually beneficial education linkages and the flow of knowledge, innovation and talent between our two countries," it added.

(Arul Louis can be reached at [email protected] and followed @arulouis)

The stunning Edwina Mountbatten had at least 18 lovers:...

Protest announced against attacks on Hindu temples in B'desh

We look forward to having peaceful dialogue with Chinese...

US to re-assess its relations with Pakistan