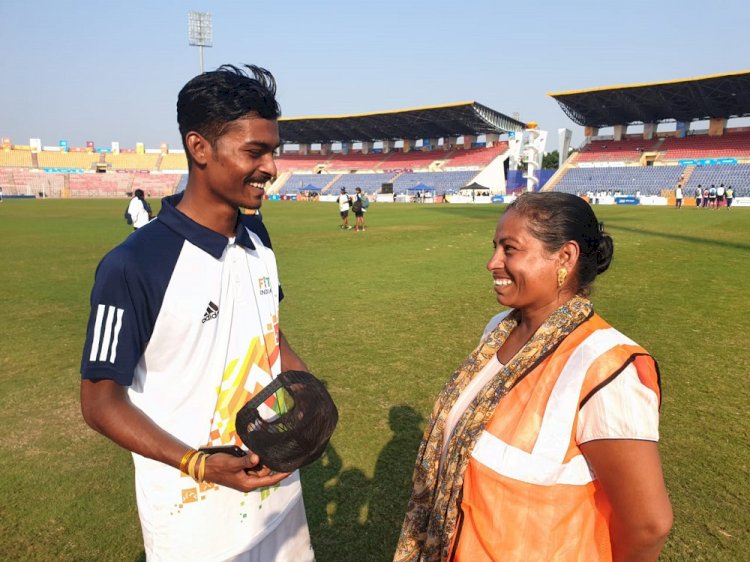 Poornima Mondol chats with her son during the Khelo India Youth Games.

Guwahati: A mother of three children from Assam, Poornima Mondol has produced three athletes in three different sports for Assam. All three of them - Sujit Mondol (kho kho), Pradip Mondol (hockey) and Mallvika Mondol (football) are representing their state at the third edition of the Khelo India Youth Games in Guwahati. Switching through multiple jobs in her life, the determined Poornima has provided all the necessary financial support to help her children attain success in sport.

"I have had multiple jobs in my life. I worked in a school for sometime before leaving it because the salary was very low. Then I opened a shop, which unfortunately didn't garner revenue. Now, I hoping to get a job at a school again. My husband is a carpenter. His job was giving us a good income at one point, but now he doesn't get as much work as he used to get before, so it's a little difficult for us," said Poornima.

Poornima expressed that she faced financial trouble when her children had just started to take up sports.

"In the beginning, I faced a lot of trouble while providing sporting equipment for my children. But now, when they win in tournaments, they receive some money which has eased me a bit. Now, they earn enough to provide for themselves as well," said the proud mother.

When asked why did she ask her children to take up sports, Poornima said that sports was the best way to keep her children occupied.

"I put my children in sports because I didn't want them to waste their time after school hours. Now they come back from school and go out to play sports. Earlier, they used to go out, so I was worried that they would meet some people who would take my children in the wrong direction," said Poornima.

Kho kho is not a very popular sport in India, but still, Poornima's son Sujit chose to play the sport. The Assamese athlete expressed that he was always fascinated with the sport.

"I have always been fascinated with the kho kho sport since my childhood. I have grown up watching the sport. Now, I have got a chance to play for the Assam kho kho team. Kho kho is a game that not many people understand. We have to show the sport to people and teach them the basic rules, they only they will understand it. Even though kho kho is not a popular sport in India, I enjoy playing it and that's why I chose to play kho kho," said Sujit./Jan 17, 2020

Fencing to make its debut in Khelo India at University...

National Postal Badminton at Dharamshala from Feb 22 to...