A first on Indian television, an untold socio-drama around Agrasen Maharaja’s ideology only on &TV! 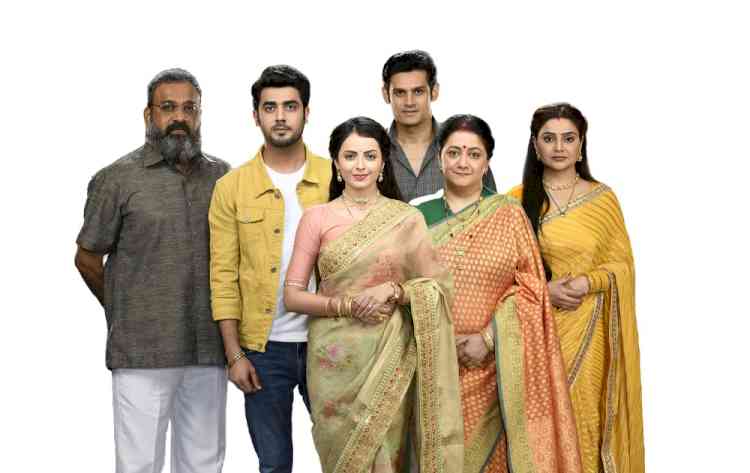 Socio-mythology stories have been an eternal part of Indian culture for ages, with a wide range of stories and legendary kings, queens and Gods. In its endeavour to offer extraordinary and captivating stories for its viewers, &TV is now all set to present its latest fiction offering with ‘Ghar Ek Mandir-Kripa Agrasen Maharaja Ki’. Produced by Zee Studios, the show has a stellar star cast comprising of Shrenu Parekh as Genda, Sai Ballal as Kundan Agrawal, Sameer Dharamadhikari as AgrasenMaharaja, Akshay Mhatre as Varun Agrawal, Vishal Nayak as Manish Agarwal, Kenisha Bhardwaj as Nisha Agarwal, Yamini Singh as Santosh, Archana Mittal as Anuradha Agarwal, amongst others. The show will premiere on August 10, 2021, at 9:00 pm on &TV and will air every Monday to Friday.

‘Ghar Ek Mandir-Kripa Agrasen Maharaja Ki’ is a never-seen-before socio drama on Indian television built around the context of the legendary king, Agrasen Maharaja. Agrasen Maharaja was the founder of the Agrawal community of traders.His teachings and principles hold relevance even today and serve as guiding force for leading life. The story will depict Agrasen Maharaja’s core principles through his ardent bhakt and the show’s lead protagonist, Genda. Genda,a devoted girl belonging to a low-income family, is married into a business family. The captivating narrative will bring alive the beautiful relationship of faith between Agrasen Maharaja and his devotee Genda, who considers him her philosopher, guide and friend. Genda faces several challenges in her journey and conquers every barrier by following AgrasenMaharaja’s guiding principles. The show brings a heart-warming and captivating story of faith, family and life.

Talking about the show, Vishnu Shankar, Business Head, &TV says, “In challenging times what helps us stay afloat are our principles, our beliefs and most importantly, our family. We are proud to bring to the television screen for the first time ever, a socio-mytho show around the legendary Agrasen Maharaj, whose principles and teachings are so relevant even today, centuries later. While he may have been the founding father of the Aggarwal community, his teachings are universal. Our show ‘Ghar Ek Mandir – Kripa Agrasen Maharaja Ki’ is a captivating tale of faith, family and life.”

Anshul Khullar, Business Head, Zee Studios, comments, “Through the medium of Zee Studios we are launching a unique show on &TV titled ‘Ghar Ek Mandir - Kripa Agrasen Maharaja Ki’- a never-told-before story around the context of a legendary king, AgrasenMaharaja. The show is a first of its kind on television, introducing you to the simple and relevant principles of Agrasen Maharaja through our protagonist, Genda Agarwal. The story is an emotional journey of Genda and how she conquers every challenge in her life through her faith. We hope the viewers will welcome the Agarwal family and shower us with their love and support as the show goes on air on August 10.”

Talking about Genda Agarwal’s character, Shrenu Parikh says, “Genda is a devoted girl belonging to a low-income family who gets married to Varun Agarwal, the epileptic younger son of Kundan Agarwal, who owns Agarwal & Sons – a family-run jewellery shop. She has deep-rooted traditional values and will go to any extent to protect her family. She has grown up listening to and living by Agrasen Maharaja’s four core principles that have helped navigate various life problems. She shares a unique and beautiful bond with him, of him as her guide, philosopher and friend.” Akshay Mhatre, essaying Varun Agarwal’s character, says, “Varun is Genda’s husband and the Agarwal family’s youngest and most pampered son. He is the Agarwal’s family’s ‘Ankhon ka tara’. Varun is a very easy going person who avoids taking any tension. He would rather spend time pampering himself or playing video games than doing some work. He loves getting pampered and wants his wife to take good care of him. Varun takes immense pride in his father’s family business, and he feels that it is enough for him to lead a comfortable luxurious life without working outside.”

Sameer Dharamadhikari essaying Agrasen Maharaja’s character, says, “It is an honour to portray the pivotal role of Agrasen Maharaja himself. He laid the foundation of the Agrawal community. Genda is an ardent devotee of Agrasen Maharaja, and through her faith, conquers various challenges in her life.People are aware of Agrasen Maharaja, but there has been very little representation, especially in the Hindi GEC space. This show is a first in many aspects. This story is unique and quite refreshing. I am sure it will intrigue and strike a chord with the viewers.”

Sai Ballal, essaying Kundan Agarwal’s character, says, “Kundan Agarwal is a businessman who owns Agarwal & Sons – a family-run jewellery shop. He has two sons, Manish and Varun. Kundan is a family man and is always concerned about the well-being of his children and his family. Along with family, he also holds dear his jewellery-making business, passed down the generations. Understandably he wants his sons to take over the reins of his business. He is assertive and has a certain set of beliefs that cannot be wronged.” Archana Mittal, portraying Anuradha Agarwal’s character, says, “Anuradha is a homemaker whose aim is to keep the family values upright. She shares a loving bond with her husband, Kundan Agarwal and runs the household. Her wish is to see her sons prosper and become businessmen like their father and her daughters-in-law take care of the family like her. She sticks to her traditional belief system and does not believe in changing with time.”

Vishal Nayak, portraying Manish Agarwal’s character, says, “Manish is Kundan Agarwal’s eldest son and his biggest hope for taking over the reins of the family business. He is well-educated, ambitious and modern, inclined towards a corporate job than joining the family business. Manish is a family man and respects his father’s business. However, deep down, he is very ambitious and wants to make a name for himself. But his father cannot understand his dreams and aspirations, which leads him to rebel.” Kenisha Bhardwaj, portraying Nisha Agarwal’s character, says, “Nisha is Manish’s wife and Genda’sjaithani. She is a jovial person who lights up the house with her cheerfulness. Nisha belongs to a small town and has big dreams and aspirations. She is very supportive of her husband’s ambitions.”

Yamini Singh, portraying Santosh’s character, says, “Santosh is Genda’s mother, and like every mother, she is always worried about her daughter’s future and wants the best for her. She is well aware of her daughter’s abilities and her unwavering faith in Agrasen Maharaja.”

Here's why we feel Abhishek Nigam and Siddharth Nigam are Jai & Veeru of television...

7 Tricks to Make the Most of any OTT platform

Live your dreams and follow your passion: Singer Sheenam...