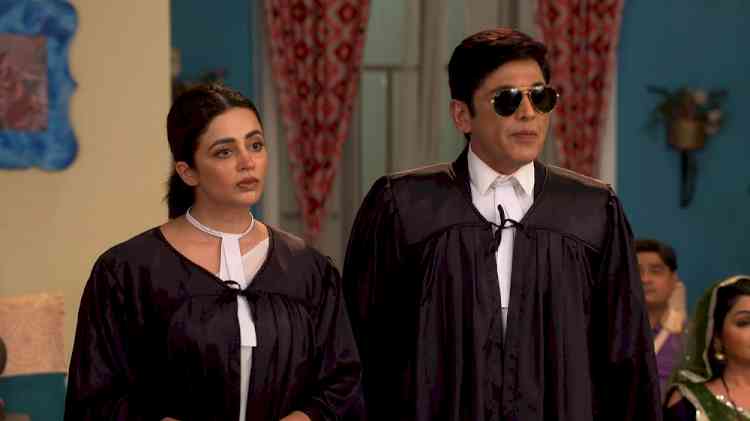 Get ready to witness showdowns in the upcoming episodes across &TV shows. In Bhabiji Ghar Par Hai, Manmohan Tiwari (Rohitashv Gour) finds himself at crossroads with his beautiful Anita Bhabi (Nehha Pendse) who is fighting a court case against him. Either way, Manmohan is destined to lose! Whereas, Rajesh (Kamna Pathak) who tire to create a rift between her husband Happu Singh (Yogesh Tripathi) and Beni (Vishwanath Chatterjee) makes matters go out of hand in Happu Ki Ultan Paltan. Bringing aandhi and toofan are the new visitors at Pappu’s (Manmohan Tiwari) guest house in Gudiya Humari Sabhi Pe Bhari with an announecement that there is a pot full of gold hidden in the haveli, followed by an exhausting treasure hunt. In Santoshi Maa Sunaye Vrat Katahyein, a time warp takes place bringing Indresh (Ashish Kadian) back to life and Swati (Tanvi Dogra) to justice. But will Asur Rani Paulomi (Sara Khan) give up without a fight? Sharing more on the zesty details of the track, Nehha Pendse aka Anita Bhabi shares, “If there is one woman who can influence Vibhuti Narayan Mishra (Aasif Sheikh) like Anita does, is Angoori Bhabi (Shubhangi Atre). When Tiwari ji tortures Tillu (Syed Salim Zaidi) under pandit ji’s orders, Anita gets furious and files a case against him. When Angoori convinces Vibhuti to fight Tiwari ji’s case against Anita herself, things get heated.”

Kamna Pathak aka Rajesh Singh says, “Beni and Happu’s dosti is pakki! But Rajesh has triggered the two of them that will result in an ugly fight. The pair makes efforts to make each other feel jealous and ultimately refuse to talk. Iss darar ke beech, will Rajesh and Kamlesh (Sanjay Chaudhury) be able to patch the two best buds?”

Samta Sagar aka Sarla shares, “The Gupta family is used to Gudiya’s frequent surprises. This time around she brings the previous owners of the house who got displaced a long time ago. They reveal that back in the day they hid a huge pot of gold in the house. After knowing about the treasure, Sarla is determined on finding the fortune.”

Sara Khan aka Asur Rani Paulomi shares, “Swati along with the help of Santoshi Maa (Gracy Singh) has always fought her battles. But will Indresh support her after being emotionally blackmailed by his father Singhasan Singh (Sushil Sinha)? Asur Rani Paulomi will not let Santoshi Maa win and to find out how, the audience must stay tuned!”

7 Tricks to Make the Most of any OTT platform

Relive 101 per cent Shuddh Romance with Zee Bollywood premiere of ‘Dhadak’ this...

Pawan Malhotra: Being Punjabi an advantage in portraying...