Gaggal airport expansion will be executed only after taking public in confidence: CM Himachal

CM was reacting to delegation of Gagal and surrounding panchayats 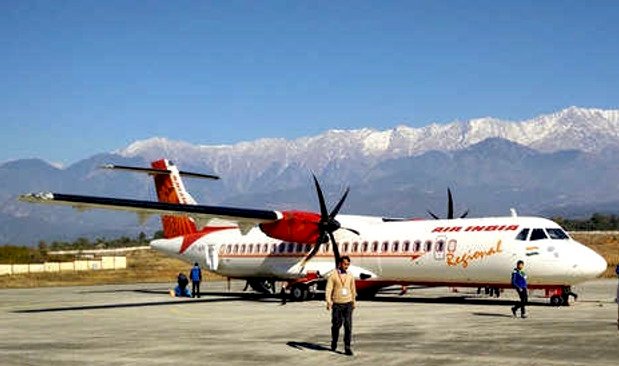 Dharamshala: CM Jai Ram Thakur  said  that  Dharamshala’s Gaggal  airport expansion work will be executed only after taking the  public in confidence. He said that authorities will listen everybody. CM was reacting to a delegation of Gagal and surrounding panchayats, which met CM at Dharamshala to register their protest against the Gaggal airport expansion. CM assured the delegation that effected public will be heard sympathetically. “The government will provide appropriate compensation and other possible facilities to the affected public. After the survey report, a meeting will be organised with the public at Gaggal itself,” said CM. The delegation urged CM to carryout airport extension upto Manjhi Khad. People argued that further expansion would snatch away their livelihood  as well as their homes.

CM said that all the airports in Himachal Pradesh are small which include Shimla, Kangra and Kullu. “In such a situation, it is our effort to increase road and air connectivity to promote tourism. This will prove to be a milestone in Himachal's development. For the expansion of Gaggal Airport, the State Government has placed a suggestion before the 15th Finance Commission for financial assistance,” said CM.

Residents of villages in the vicinity of Dharamshala  airport at Gaggal are protesting against the planned expansion of the airport beyond Gaggal market.

Vijay Sharma, leading the Sangarsh Samiti of those protesting, Devendra Kohli, pradhan of the traders in the region and Vijay Kumar, president of Ichchi panchayat say that if the government has to expand the airport then it should be kept upto Manjhi Khad otherwise thousands of families would be uprooted and many families in the area would become landless.

It may be added here that according to the recent survey conducted by the administration, it was proposed to expand the airport to 3010 meters based on the report of the Airport Authority of India. In such a situation, some areas up to old Matour may come under the area of expansion. The length of the runway of Gaggal Airport stripe will now be increased to 3010 meters from its present length of 1920 meters, so that bigger planes could land here and more public could visit the area from India and abroad on cheaper airfare.

Land will be acquired on both sides of airport, towards the Shahpur and Kangra on the Pathankot-Mandi highway. The land for the expansion of Kangra Airport has been surveyed on the basis of the format prepared by the Airport Authority of India (AAI). Along with Kangra airport expansion, other modern facilities are also planned to be developed here. So it require more land, and its detailed report will be sent to the state government.

The state government constituted a negotiation committee headed by the Kangra Deputy Commissioner to look into the issues concerning land acquisition for the Gaggal airport.

Rakesh Prajapati, DC Kangra said that the land measurement work has already been completed. He added that in another 10 days the evaluation work of the land will be completed. He said that the compensation shall be fixed after the negotiations. Reports say that Himachal Government has sought Rs 348.50 crore from the 15th Finance Commission for the acquisition of land, most of which is privately owned.

Dharamshala  is the lone airport out of all three, from where flights have been quite regular even though abnormally high fares of up to Rs 20,000 for flights between Dharamsala and Delhi have often made headlines. There are four daily flights from Dharamshsala  as a large number of international tourists visit Mcleodganj to seek the blessings of the Tibetan spiritual leader, the Dalai Lama.

Digital health sessions to raise awareness on health and...