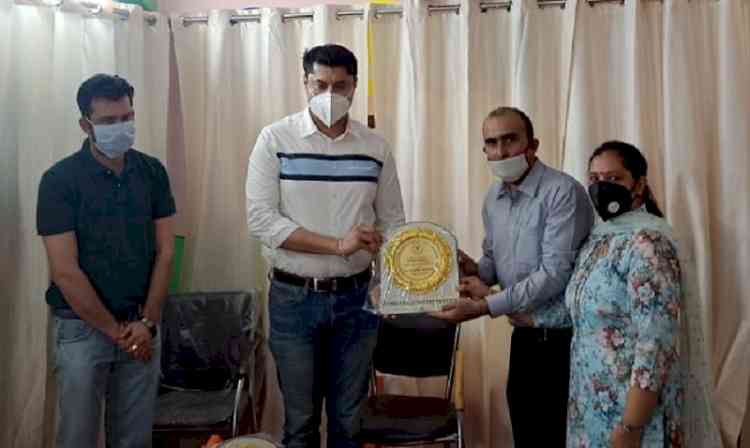 Ludhiana:  Following the appeal of Punjab Youth Development Board Chairman Mr Sukhwinder Singh Bindra, the management of Red Rose Model High School situated in Rishi Nagar area on Tibba Road have decided to waive off two-month fee and other charges of its 950-odd students for the months of April and May 2020. Besides, the school management has also decided to waive off admission fee and other funds for the entire year.
This decision has been taken by the school management in association with Mission Fateh of Punjab government and appeal by Mr Sukhwinder Singh Bindra. It is pertinent to mention that earlier, the management of Gyan Niketan Public School in Dhandari Khurd area had also waived off the two month fee of its students.
Mr Sukhwinder Singh Bindra today visited the premises of Red Rose Model High School, where the majority of the students are from migrant families. He said that the labour class has been the most affected due to the curfew/lockdown and to ensure that they do not stop sending their children to school due to non-payment of fee, he had requested the authorities to waive off fee for the months of April and May 2020.
He thanked the school management for approving of his request and assured all possible help in the near future as well. On this occasion the students as well as their parents also thanked Mr Bindra. He said that this particular school is more than 20 years old and its students have scored good marks in board examinations.
Mr Bindra also appealed to other private schools to show a bigger heart and waive off fee of its students. He said that during today's testing times, even the middle class is suffering financially and that is why all the private schools should come forward and contribute in this hour of need. On this occasion, he also interacted with the parents and said that the Capt Amarinder Singh led Punjab government is committed to provide the best educational facilities for its students.
Prominent among those present on the occasion included Board’s district coordinator Mr Nitin Tandon, School principal Mr Veenu Verma, besides several others.