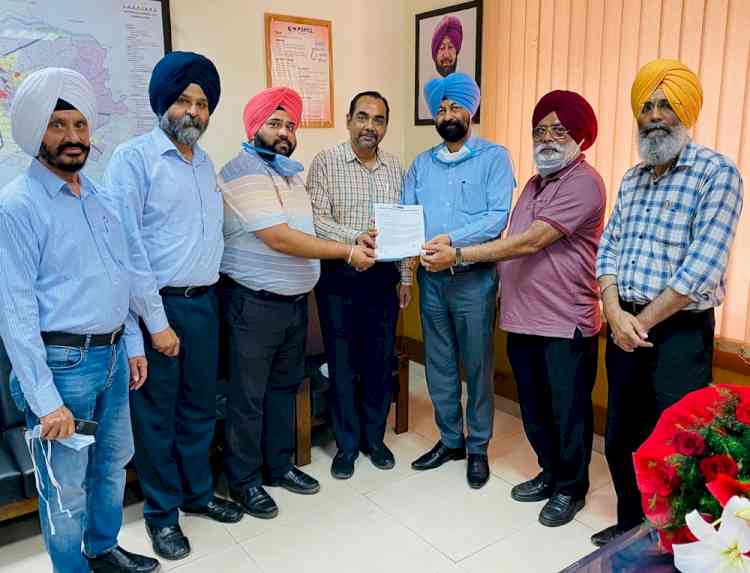 Ludhiana: A delegation of Federation of Industrial & Commercial Organization, popularly known as FICO, under the leadership of Gurmeet Singh Kular President along with Rajeev Jain General Secretary met the Chief Engineer of PSPCL Central Zone Varinderpal Singh Saini and put forward the undernoted demands of the industry.
Night Tariff:
The Night Tariff should be introduced @ Rs.2.50/- per Unit to the industry, as Punjab is surplus state in terms of Power & due to COVID-19, there is not any high demands of electricity, especially at night time, so the benefit of surplus power should be provided to the industry in this hour of crisis, with the marginally lower rate of power at night as power is a raw material to the industry, It is notable that the huge amount of power is being wasted due to non-consumption at the night time as electricity cannot be stored, it can only be utilized so the industry should be facilitated.
Infrastructure of PSPCL
It has been observed that existing 66 KV Power Feeding systems of Ludhiana are running to its maximum capacity, moreover Ludhiana is now a Smart City, considering the growth of a Smart City, the demand of power is on the rise, it is notable that more than 50 Industrial Connections in Ludhiana are pending due to feasibility limitation of the existing grids of Ludhiana. The biggest industrial grids in Ludhiana, Dhandari-1 & Dhandari-2 are running to their capacities, another grid is proposed, but the work on the same has not been started as yet, The pending 50 industrial connections one issued, will not only generate more revenue for the PSPCL, but also generate the revenue for the Government in form of GST, Property Tax, Octroi and other taxes. There is a need to upgrade the existing power distribution system of Ludhiana, FICO requests you to kindly get the power systems of Ludhiana strengthened before the summers, as the power demand will be on peak in summers.
Additional Advance Consumption Deposit
The Additional Advance Consumption Deposit, is another burden being imposed on the industrialists, especially in this period of Crisis, where industry is struggling for its survival. It is notable that the industrialists have already deposited the amount of security for the power connection, and asking for enhancement in advance consumption deposit is yet another harsh decision which will only discourage the industry of Punjab, rather it is demanded that the additional advance consumption deposit should not be enhanced at least for the period of 2 years.
Electricity @ Rs.5 per unit
The state government has promised to provide electricity to the industry at Rs.5 per unit, but still industrialist belonging to the MSME sectors are getting electricity bills at 10 to 15 rupees per unit; the state government should immediately look into the matter and provide the electricity at 5 Rs per unit to the industry.
Waiver off PSPCL Fixed Charges till 31.03.2021
It is demanded that due to prevailing situation of COVID-19, the Fixed Charges on electricity bills should be waived off at least till 31.03.2021, to facilitate the industry in this hour of crisis.
Gurmeet Singh Kular President, Rajeev Jain General Secretary, Satnam Singh Makkar Propaganda Secretary, Ashpreet Singh Sahni Organising Secretary, Harpal Singh Bhamber Head Fico Bicycle Division and Sukhminder Singh Executive Member FICO were among those present.