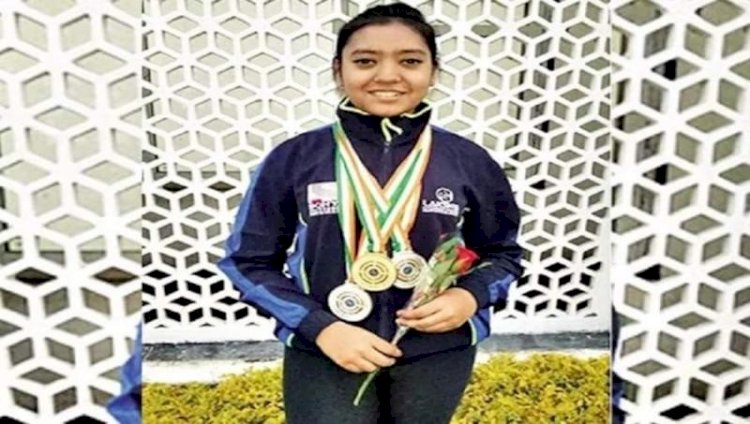 Guwahati: Nineteen-year-old Ayushi Podder of West Bengal will be fulfilling not one but two dreams as and when she makes it to the Olympics: her own and her father’s.

The talented shooter clinched the gold in the 10m air rifle mixed event of the Khelo India Youth Games here on Wednesday, pairing up with Amartya Mukherjee and promptly talked up their twin desire.

“My dream is to represent India in the Olympics; it is something that my father could not manage due to financial constraints,” Ayushi said, shortly after her medal-winning feat. “You may not believe it but we train together, each preparing for our own competition,” she laughed.

Well, Ayushi's father, Pankaj Podder, is an active shooter in the Indian Railways shooting team and still competes and wins on a regular basis.

"The Olympics were never in the picture for me because I didn't have enough funds to train for it,” he said. “Now, it is too late for me but Ayushi has a good chance of making it to the Games. She will be fulfilling my life-time dream,” he added, unable to hide his excitement.

Incidentally, Pankaj Podder runs an academy in Hooghly and coaches 12-14 kids, in addition to his own daug hter.

"Shooting has been a part of my life since the time I was born. It was expected that I would take up the sport at some point and it happened in 2013,” Ayushi explained.

Shooting is, of course, an extremely expensive sport. Ayushi's family struggled to provide equipment for her when she took up the sport in the beginning. However, the Khelo India scheme has eased their burden and allows her to compete without any financial burden.

"It was quite difficult for us to procure equipment before the Khelo India scheme began, especially the 50m events which require the rifle and ammunition. But I have a decent number of sponsors now so we are good," Ayushi said.

The father-daughter team has already mapped out a plan for the 2024 Olympics. Pankaj stressed that Ayushi would have to move from one category to the other seamlessly.

"We are currently planning for the 2024 Olympics. Ayushi is doing quite well in the 50m Rifle 3 Positions Women at the moment. It's her main event. She has recorded good results in 50m Rifle Prone and 10m air rifle events as well.