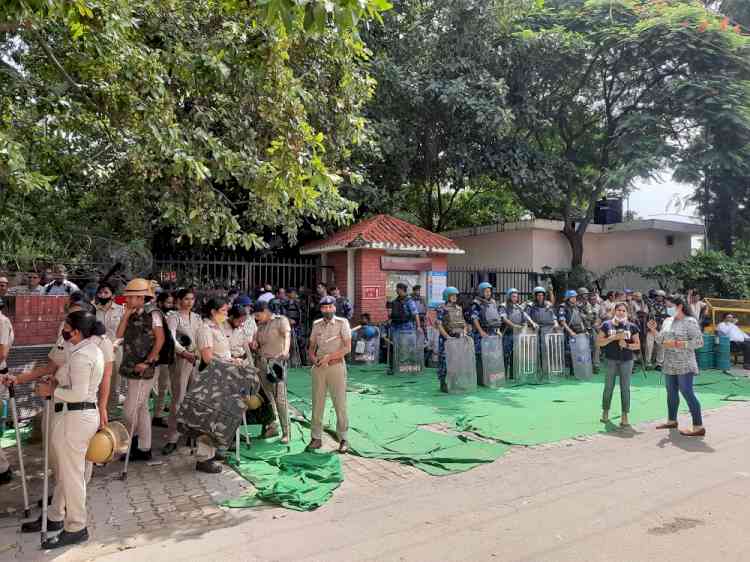 Karnal, Sep 8 (IANS) The fourth-round meeting between farmers and the administration of Karnal district in Haryana ended inconclusively on Wednesday. After coming out of the meeting, the farmers leaders said the administration has refused to take any action against SDM Ayush Sinha.

The farmers leaders said the protest will continue until their demands are met. Bharatiya Kisan Union (BKU) leader Rakesh Tikait said a parallel protest will run in Karnal, but they will not disrupt the administration's functioning.

"A peaceful protest will continue here at Karnal until the government takes action against the IAS officer. However, the administration will be allowed to function for daily services, so that the people are not affected," Tikait said.

He said they will hold a meeting after one or two days and will decide on the strategies for the protest. "We have clearly told the administration that invite us (farmers) for a meeting only if they have got instructions from the higher authorities to take action against the SDM, otherwise don't call us for a meeting," Tikait added.

It was the fourth meeting between the farmers leaders and the Karnal administration since the protest began early on Tuesday.

A delegation of 13 farmers led by Tikait attended the meeting with the administration officials and insisted on action against SDM Ayush Sinha and an independent inquiry into the matter.

Before going for the meeting, Tikait had accused Haryana chief minister Manohar Lal Khattar of conspiring to confine the farmers agitation to one district (Karnal). "Ongoing farm protests at borders of Delhi will remain the main centre of the protest. No matter how much the governments try to suppress us we will not waste energy in the protest at Karnal but would like to solve this issue as soon as possible," he added.

The decision for the fourth round of talks with the district administration was taken in a meeting held among the representatives of the farmers unions on Wednesday. It was the fourth meeting in the last 24 hours, since scores of farmers sat on a protest against the August 28 lathicharge. Three meetings on the same issue were held on Tuesday, however, all those meetings were inconclusive.

They also alleged that the Haryana police have banned the entry of farmers coming to join the protest. "All entry points to the mini-secretariat have been sealed. Farmers sitting here on protest would need water, food and other things but we are not allowed to enter. The more the government will harass the farmers the more this protest will intensify. The government must understand that farmers will not leave the place until our demands are met," said Chetan Singh, one of the protesters.

The agitating farmers said it has been more than 24 hours that they have been demanding action against the IAS officer who on August 28 ordered a lathicharge.

Firm on their demand for action against the IAS officer who has been transferred to Chandigarh, the farmers said they would not call off their protest until the government takes action against him.

The protest which began at Anaj Mandi early on Tuesday shifted to the mini-secretariat at Karnal on Wednesday.

To intensify the protest, the farmers have set up tents outside the DC office. Some farmers said that the protest in front of the district administration office will be extended if their demands are not met.

Apart from action against the IAS officer, the farmers have also demanded compensation of Rs 25 lakh and a government job to the next of kin of Sushil Kajal, a farmer from Gharaunda who received head injuries in the lathicharge on August 28 and died later due to a heart attack. They also demanded a compensation of Rs 2 lakh to all those who received injuries in the lathicharge.

Rahul Gandhi to pray at Vaishno Devi, take part in arti on Thursday

Only second dose at Punjab vaccination centres on Sundays