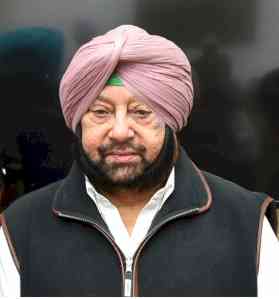 Chandigarh: Asserting that it was his government’s duty to ensure that all migrants keen to go back home return to their native states safely, Chief Minister Captain Amarinder Singh on Sunday directed the Deputy Commissioners and District Police Chiefs to ensure that no migrant is forced to walk home to any other state in the country, or to remain hungry while in Punjab.
Any migrant found walking on the road  should be transported by bus by the police to the nearest place from where he can board a train or bus to his native State, the Chief Minister directed the DCs and the police officials, even as the 300th Special Shramik Train left the state carrying migrants to Uttar Pradesh. Till they leave Punjab, they should be provided food and water, he has further directed the officers.
Urging the migrants not to panic, the Chief Minister assured that the state government would make sure that every single migrant who is keen to return home is assisted by the State, with arrangements for their free travel and food.
Underlining the state’s commitment to “look after every person in distress”, Captain Amarinder described the migrants as “our fellow Indians who contribute to the State and its economy”.
“Punjab is your karma-bhoomi, even if it is not your janam- bhoomi,” said the Chief Minister to the migrants, appealing to them not to try to undertake arduous journey by foot to their native place as the state government is making all necessary arrangements for their travel by trains or buses.
The Chief Minister disclosed that more than 10 lakh persons have registered on the State portal for outbound movement from Punjab. The state government has undertaken a massive validation exercise of all registered persons by making individual phone calls to re-ascertain whether or not they are keen to return to their native States. “This is being done in view of the fact that, in the past 3-4 days, around two-thirds of the industrial units in the State have commenced operations after the easing of restrictions, following which the number of persons keen to travel out of Punjab has reduced considerably,” he said, terming it a welcome sign.
However, the State Government would continue to ply trains to the concerned States till such time persons evince desire to return home, said Captain Amarinder, adding that the state government has had already paid Rs. 20 crore to Railways for free travel of migrant workers to their respective States following its decision in April-end to provide free travel and food for all the migrant workers keen to return to their respective States.
The Chief Minister shared that the 300th Special Shramik train today departed from Patiala for Uttar Pradesh at 5 PM. By Sunday night, 311 Special Shramik trains carrying more than 3.90 lakh passengers would have been sent from different districts of Punjab to various States of India, including States of southern India and the North-East.
In addition, migrant workers are also being transported free of charge from their homes to the railway stations by government buses across the State. Punjab has also sent State Transport buses to drop migrant workers to districts of western Uttar Pradesh without any charge to the migrants. “Punjab’s officers, both in the State headquarters as well as in the districts, have done a commendable job in facilitating this organised movement of migrants” said the Chief Minister.
At the same time, the state government is also facilitating Punjabis stranded in other states to return to Punjab, including providing financial assistance for travel, wherever necessary. Captain Amarinder, however, expressed the hope that “all State Governments will abide by their responsibility of transporting our persons stranded in other States.” The Chief Minister said he had already written to all concerned Chief Ministers in this regard. Punjab is the motherland of all Punjabis and it is our duty to bring them back to the State, said Captain Amarinder.
Allaying concerns on this count amid fears of Covid-19, Captain Amarinder further said clear protocols ae in place for quarantine and testing of such travellers, to check further spread of the virus in the state.

PAU students get 5 lakh as assistance