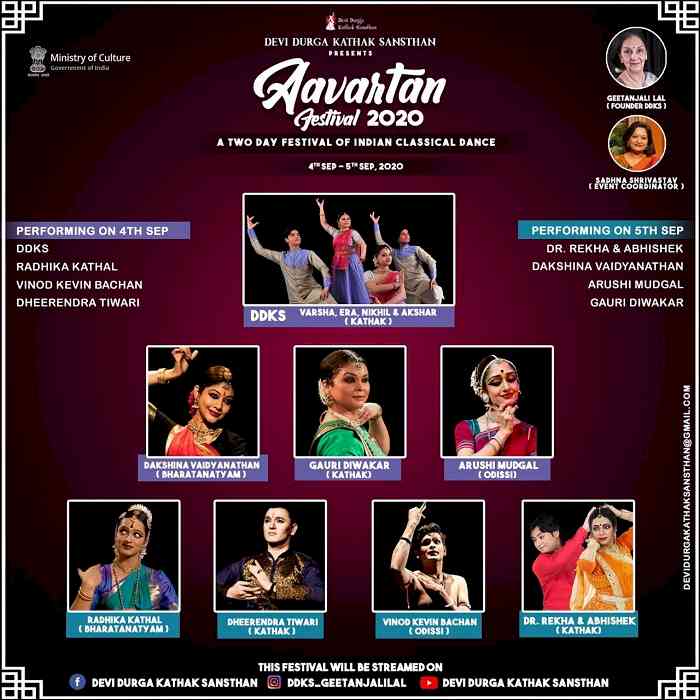 In the language of music and dance, Aavartan is known as a Time-Cycle showing the beginning and the end submerged into each other. This represents continuity and gives meaning to the existence in a full circle. The 2-day festival will be some renowned artists from the world of Indian classical Dance. To bring the essence of a live concert, all the performances will be available at 7 p.m. of the respective day and would not be saved for a later watch, unlike other videos.

On the first day, the festival will start with a Kathak performance, by Varsha Das gupta, Era Dogra, , Akshar Tekchndani and Nikhil Parihar, as the artists of Devi Durga Kathak Sansthan They will present DAMRU, a magnificent choreographed by Guru Geetanjali Lal, in the time cycle of 14 beats. This will be followed by a beautiful Bharatanatyam ensemble by Radhika Kathal, a senior disciple of Guru Geeta Chandran. Later, young classical dancer Vinod Kevin Bachan will perform Odissi . He is a senior disciple of Padmashree Guru Ranjana Gauhar. The festival on day one will conclude with Kathak artist Dheerendra Tiwari’s performance. He is a disciple of a renowned guru of Jaipur Gharana, Pandit Rajendra Gangani.

On the second day of the festival, Kathak artist Dr. Rekha Mehra will present her performance followed by Dakshina Vaidyanathan’s Bharatanatyam presentation. Dakshina is a third-generation Bharatanatyam dancer. She is the granddaughter of Saroja Vaidyanathan, a veteran dancer-guru-choreographer, and daughter of Rama Vaidyanathan, a well-known dancer and a former disciple of Yamini Krishnamurthy and Saroja Vaidyanathan. This is followed by Arushi Mudgal’s Odissi performance. Arushi, a thriving artist is a senior disciple of Shrimati Madhavi Mudgal, and has learnt music from her father Shri Madhup Mudgal at the Gandharva Mahavidyalaya. The festival will conclude with Gauri Diwakar’s Kathak. The stellar artist is  trained under Pt. Birju Maharaj and his son Jaikishan Maharaj. She continues her journey under the guidance of Aditi Mangaldas.

The Aavartan Festival will be showcasing some of the most talented and celebrated artists of our country, who are the disciples of such legendary Exponents of Indian classical dance forms like,Birju Maharaj, Geetanjali Lal, Jai Kishan Maharaj, Geeta Chandran, Madhavi Mudgal, Ranjana Gauhar, Rajendra Gangani, Saroja Vaidyanathan and Rama Vaidyanathan.

Webinar on introduction of financial markets

Playboy Club opens its doors in Chandigarh, set to redefine...