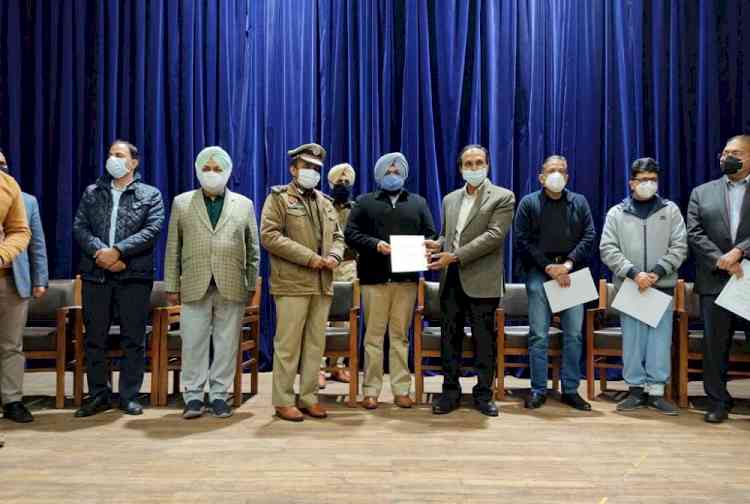 Ludhiana: The District Administration today honoured the frontline workers who have worked hard and wholeheartedly during the peak of Covid-19 pandemic in district Ludhiana. Deputy Commissioner Mr Varinder Kumar Sharma was the chief guest on the occasion, who thanked all stakeholders for controlling the pandemic in the district.

While speaking on the occasion, Deputy Commissioner Mr Varinder Kumar Sharma thanked officials from all government departments and NGOs for working 24X7 during the peak of Covid-19 pandemic in district Ludhiana. He specially appreciated the role of Ludhiana Police in the distribution of langar and essential commodities along with maintaining law and order in Ludhiana. He also thanked Mr Sachit Jain for not only providing masks and PPE kits, but also ensuring supply of oxygen totally free of cost so that no person dies due to shortage of oxygen. He said that it was efforts of people like Mr Jain that no person died due to shortage of oxygen in the district.

He also appreciated the role of ADC (D) Mr Sandeep Kumar for keeping a liaison with the private hospitals and it was due to his dedicated efforts that the number of beds in private hospitals rose from 120 to 1200 after he joined. He also thanked the members of Sanjeevani group for providing much needed medical advice related to treatment at that point in time. Mr Sharma also thanked the NGOs for playing a proactive role in all aspects of controlling the pandemic.

ADC (D) Mr Sandeep Kumar, who is also the Nodal Officer for Covid-19 for district Ludhiana, highlighted that due to the efforts of District Administration Ludhiana, more than 12 lakh persons reached their destinations totally safe. He also said that it is a matter of great pride that maximum number of testing was done in district Ludhiana as compared to all other districts of the state.

Commissioner of Police Mr Rakesh Agrawal said that it was due to the efforts of all stakeholders that we have been able to come out of the peak of Covid-19 pandemic in district Ludhiana. He said that out of around 4500 police personnel under Police Commissionerate Ludhiana, around 450 got affected by Covid-19 and two of their officials, ACP Mr Anil Kohli and ASI Mr Jaspal Singh passed away performing their duties at that time. He specially thanked Deputy Commissioner Mr Varinder Kumar Sharma for organising this function for honouring the frontline warriors.