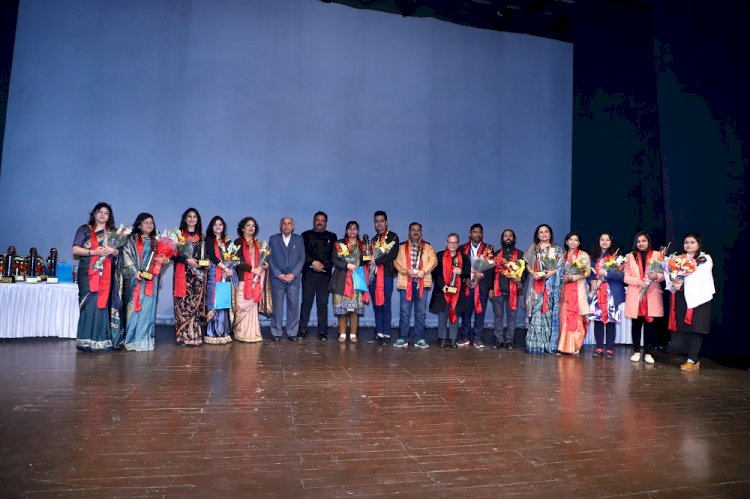 The Delhi Collage of Art celebrated its 18th anniversary at the Shri Ram Centre at Mandi House, New Delhi. The principals of some prestigious schools of Delhi-NCR and teachers of fine arts received the B. C. Sanyal Award, in the presence of well-known artists Sneh Bhasin, Shyam Prasad, Ajay Sameer, Amar Singh Gosain and Amit Dutt. DCA Founder-Principal Ashwani Kumar Prithviwasi said that rather than making the students focus only towards science and commerce subjects, these schools are also promoting the arts and its professional aspects to them. DCA had honoured nine such schools last year too and this year 10 more schools became part of this list. DAV School, Vasant Kunj, Blue Bells International School, East of Kailash, K. R. Mangalam World School, Vikaspuri, Modern School, Barakhamba Road, DPS International School, Saket, Sanskriti School, Chanakyapuri, Springdales School, Dhaula Kuan, Government BSS School, Tekhand, Shiv Nadar School, Gurgaon and Government Senior Bal Vidyalaya, Shahdara are among the schools awarded the B. C. Sanyal Award this year. The award was instituted 12 years ago in the memory of the doyen of modern Indian art, Bhavesh Chandra Sanyal. Artists who have made significant contributions in the field of Indian art are awarded the B. C. Sanyal and Life Time Achievement Award by DCA. Artists such as MF Hussain, Krishan Khanna, Manjeet Bawa, Ram Sutar, Jatin Das, Anjolie Ela Menon, Anupam Sood, Niren Sen feature in this list. More than 60 people have been honoured so far.

At the function, Ashwani Kumar Prithviwasi, reminiscing his journey related to art in the last three decades, said that he got the opportunity to teach about 7000 students during this time. These include people from 40 countries. According to him, till 1996, there were only two government colleges, two semi-government, and one private college for teaching fine arts in Delhi. It was then that on 17 August 1996, the institute started with one student in Uttam Nagar, Delhi. Gradually this number kept increasing. In 2001, the institute was launched professionally. Today, the Delhi Collage of Art has many branches.

On this occasion, the Delhi Collage of Art also distributed scholar trophies and diplomas to its previous year students. The annual festival was intermittently graced with colorful cultural programmes by student.

60 Entrepreneurs trained in workshop under NAPS by FICO

Web lecture on “The Rigours and Chills of a Journey in...