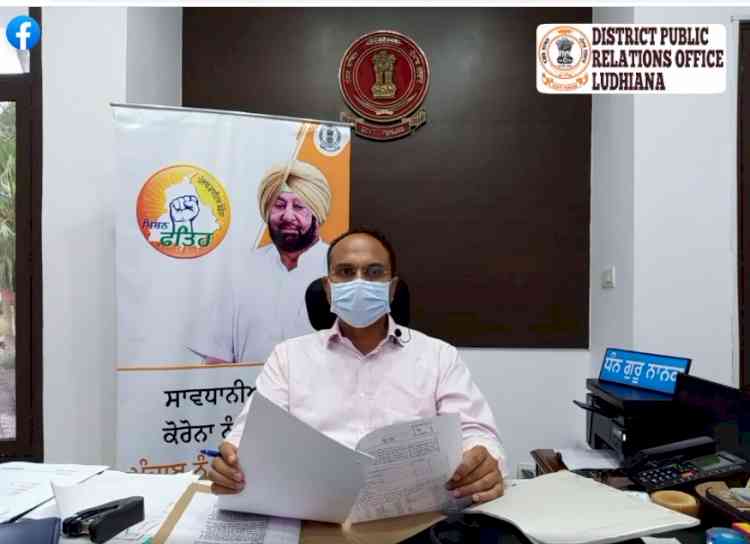 Seeks cooperation of residents to prevent dengue outbreak by not letting water stagnation
Ludhiana: Deputy Commissioner Ludhiana Varinder Kumar Sharma on Wednesday, during his latest weekly Facebook live session, expressed gratitude to the district residents for accepting his and Chief Minister Captain Amarinder Singh’s appeal to undergo COVID-19 tests by defying false rumours.
Deputy Commissioner said that six mobile vans in the district are on task to conduct COVID-19 tests. He said that averagely 5000 COVID-19 tests are being conducted daily while near about 2.5 lakh tests have been done in the district so far.
He said that with the cooperation of the residents, the epidemic has been brought under control to a large extent. He said that when the corona disease was at its peak, there were 300 to 350 people were found positive from 1000 corona tests while even as the testing capacity has been increased to 5000 averagely 180 persons are being found positive, which is about four per cent. “This is the ray of hope for us that the number of positive cases has come down drastically," he said.
Deputy Commissioner Varinder Kumar Sharma where thanked residents for bringing COVID-19 situation under control on the other side also solicited their support for another challenge to prevent vector-borne diseases like Dengue and Chikungunya. He said that the season has come when larvae in clean water can breed a special type of mosquito, which spreads dengue and chikungunya. He said that symptoms of this disease were similar to those of corona, such as severe headache, fever, and platelet cell depletion.
The Deputy Commissioner appealed residents to keep their surroundings clean and don’t let water stagnant anywhere whether it’s roofs of houses or offices, decorative pots, old tires or coolers. He also directed the officers, employees of the district administration and district residents to observe “Friday as dry day” by cleaning the corner of house or office where you feel that water could be stagnant.
Meanwhile, Deputy Commissioner also appealed protesting farmers to take care of their health while holding protests and also asked them to adhere to all safety protocols including wearing masks, washing hands frequently and maintaining social distance. He also appealed protestors to allow emergency services like ambulances and oxygen suppliers to move as their delay can cost lives.
Deputy Commissioner also answered questions from residents during the Facebook live session./ (Sept 24)

Punjab imposes restrictions in all cities during unlock-3