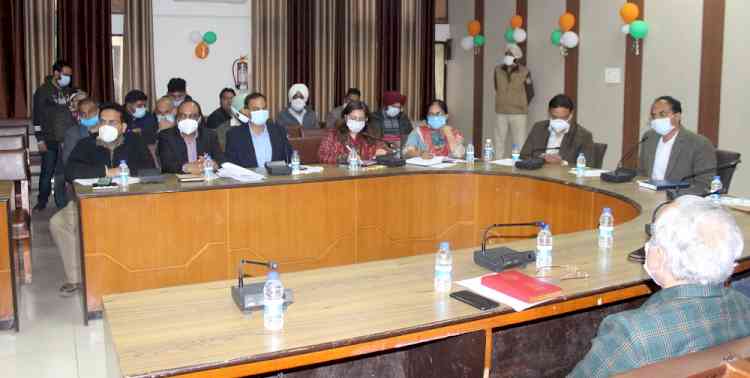 Ludhiana: Deputy Commissioner Mr Varinder Kumar Sharma today directed the officials of National Highways Authority of India (NHAI) to prepare a comprehensive plan for the solution of all traffic related bottlenecks on national highways in district Ludhiana. He further said that the NHAI officials would have to submit their written proposal by February 25, 2021.

During the meeting, the Deputy Commissioner took stock of the current status of the ongoing projects and directed the NHAI officials to speed up the work so that people can be benefitted from these projects. The NHAI officials assured that all such issues would be dealt with on priority basis.

The other issues discussed in the meeting included water accumulation of service lanes near Hero Cycles and Sherpur Chowk, entry/exit points for Samrala Chowk, Sherpur Chowk and Focal Point areas for traffic going towards Jalandhar.

Mayor Mr Balkar Singh Sandhu pulled up the NHAI officials for their failure to install streetlights on service lanes along the NH44 (Delhi-Amritsar Road). He rued that when one enters the city, the entire stretch remains in darkness, but the case is different in Phagwara, where proper streetlights have been installed.

MC Councillor Mrs Mamta Ashu, who attended this meeting on behalf of Cabinet Minister Mr Bharat Bhushan Ashu, asked the NHAI officials to ensure that they submit the written proposals by February 25, 2021. She said that the NHAI officials had committed to submit these proposals in January too, but till date, nothing has been done in this regard.

Sponsor vaccine for needy people on birthdays or anniversaries...

New born baby with multiple infections gets new lease of...