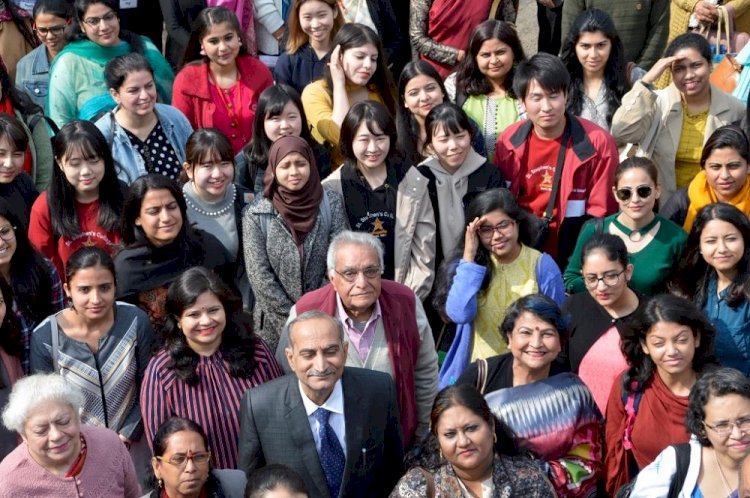 Chandigarh: MELOW, the Society for the Study of the Multi-Ethnic Literatures of the World hosted its 19th International Conference at Panjab University, Chandigarh from February 21 to 23, 2020. The theme of the conference was “Connections/disconnections: literary traditions, continuities & disruptions”. The conference aimed to discuss topics related to the timeless and the temporal in the world of literature, continuities and disruptions in the literary tradition, and the making and breaking of literary canons.

Day 2 of the conference had simultaneous sessions held at multiple venues.
Session III A was held at the Main Hall chaired by Nilakshi Roy. The Speakers included Satnam Singh and Jashanpreet who presented a paper titled Gay or Queer Canon: Disrupting the Heterosexist Predominance of Mainstream Canon Formation, Ishita Sareen and Nitika Gulati collaborated on Graphic Narratives and Narrative of Graphics: Invading
the Literary Canon and Sujata Thakur and Meenakshi Thakur’s  From Feminism to Womanism- Extending beyond Gender. The concluding paper was presented by Shruti Gaur titled Politics of the Best Seller and the Temporality of Tradition.

Session III B was held at Language Lab, 1st Floor chaired by Senath Walter Perera. The Speakers included Nipun Kalia who presented a paper titled The Gendered Myth: Queering of Mythology in Devdutt Pattanaik’s Shikhandi and Other Tales They Don’t Tell you, Rashmi Sharma’s The Digital Mythologies of Mahabharata: A Study of Epic’s Memetic Adaptations. The concluding paper was presented by Shikha Pawar titled The Shift in Narration: Centralization of Draupadi’s Perspective in Chitra Banerjee’s The Palace of Illusion

Session IV A held at the Main Hall chaired by Eric Chinje. The Speakers consisted of Japanese Panel I i.e. Koharu Ogawa and 8 panelists who collaborated to present a paper titled Adaptations, Revisions, and Reworking of Landmark Texts: Japanese Adaptations of
Lewis Carroll’s Alice in Wonderland.

Session IV E was held at the Ground Floor, Room no. 2 chaired by Harpreet Vohra. The papers presented included Sango Bidani’s A History of the Cinematic Adaptations of Devdas in Hindi Language, Aparna Pathak’s A Canon is Drawn: An Enquiry into Canon Formation in Comic Books, and Anirban Guha Thakurta’s May some useful Lesson Teach: A Study of the Continuities and Reversals of Traditions in The Anti-Slavery Alphabet (1846). This was followed by Lunch Break and a plenary session.

This was followed by the ISAAC Sequeira Memorial Lecture chaired by Tej Nath Dhar. The esteemed Speaker Senath Walter Perera discussed Sri Lankan Writing in English: The Search for an Elusive Canon.

The ISM AWARD Session was held which was chaired by Manju Jaidka. The papers competing for the prestigious award included Ashita Thakur’s Canon as Curriculum, Pia Bakshi’s Reimaginings: Hyphenated identities and Canons and Semanti Nandi’s George Egerton: Reclaiming the Subdued Voice of the Fin de Siècle.

PU Professor admitted as Fellow of Royal Society of Chemistry

Visit to Institute for Blind