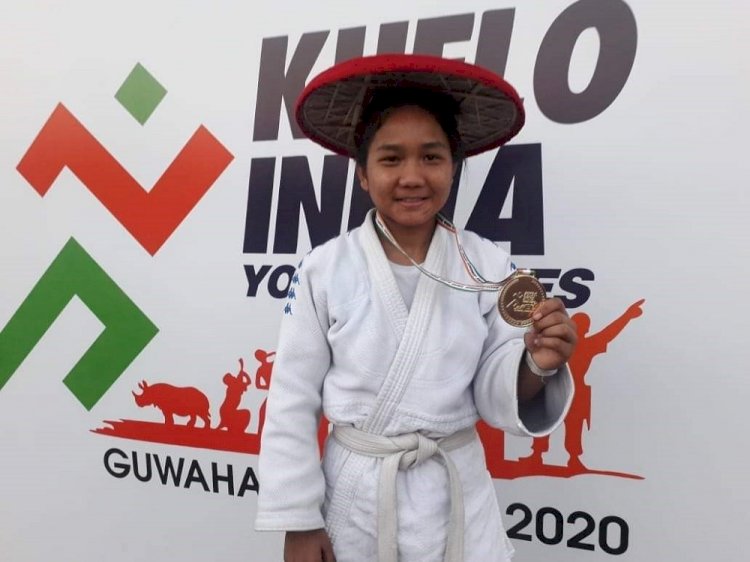 Guwahati: The daughter of a cab-driver, Assam's Puja Basumatary, bagged host state Assam's first Gold medal of the Khelo India Youth Games 2020 on Sunday after defeating Uttarakhand's Sneha Chauhan 1-0 in the Finals of the U-17 Girls -57kg category. here at the SAI Centre in Paltan Bazaar. The journey of this small town girl from Assam's Karbi Anglong district started when she first went to see her brother, who is a national level wrestler, compete in a local competition. According to the 17-year-old judoka, she felt she "was meant to compete as an athlete" when she looked at the wrestling and judo matches.

In early 2015, it was her brother who gave her the chance to choose between wrestling and judo, and Puja says she chose judo because "she didn't like the wrestling costume, and preferred the judo dress."

A sport that Puja chose to take up by incidence has now become her obsession. According to her Khelo India national camp coach and former Arjuna Awardee Yashpal Solanki, the 17-year-old "eats, breathes, lives judo" and "watching her walk into the judo arena is like seeing a viewer watch their favourite movie"

Having started competing professionally only in 2018, Puja has become one of the most promising judokas in the country, and currently trains at the Khelo India national camp in Bhopal under Solanki, who is already expecting her to compete with other Senior level athletes in the country. "Having already become the best player in youth nationals last year, currently Puja is one of the finest judo athletes in the country, and with the caliber that she possesses, I expect her to become the number one in the senior category in India by the end of this year," said Solanki.

Puja, on the other hand, says that she uses a different approach when looking forward to big competitions, and "doesn't focus on winning the competition," but "wants to just beat the judoka who is in front of me on the mat." She further said, "I am always ready to fight, and just aim to apply my technique and beat my opponent. My coach keeps telling me to calm down during matches also, but I have only one goal in mind - that is to win."

Having won Assam's first gold medal at the Khelo India Youth Games, it won't be long until we hear that Puja has won many more precious medals for her state and her country. "I have always believed in her capabilities, and I think she has the talent and the physique to be an Olympian for India one day," said Solanki.

While for Puja, who has her family's backing to continue working her way up the ladder in judo, the "only aim is to become the number one in India, and be amongst the top-10 athletes in the world."