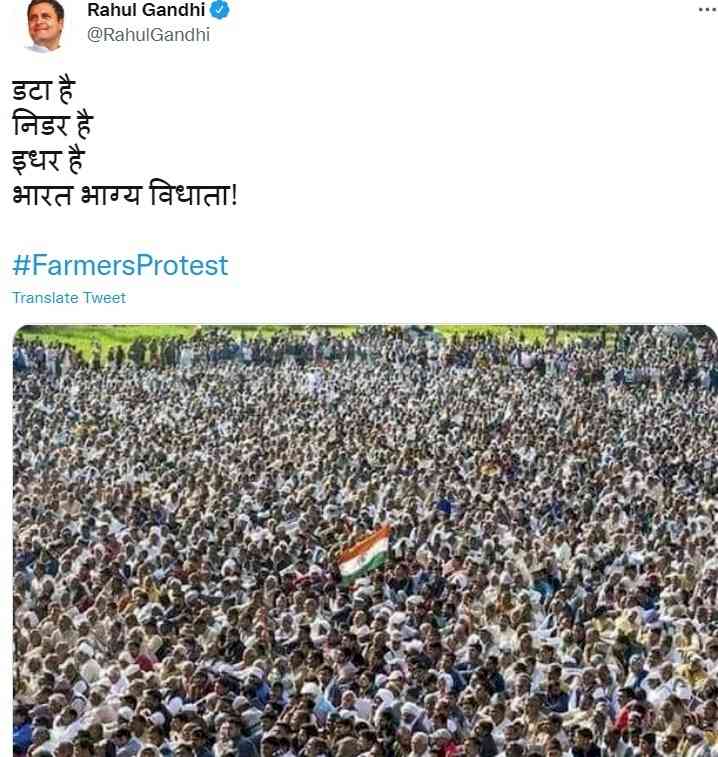 In a tweet Rahul said, "Fearless at the forefront... he is the fortune maker of India."

Congress newly appointed in-charge of agitation committee, Digvijaya Singh said, "Kisan Mahapanchayat has proposed Bharat Bandh on September 27. All the non-BJP parties should try to make it a grand success."

Earlier on Sunday, Priyanka Gandhi Vadra said that the farmers are the voice of the country.

The Kisan Mahapanchayat in Muzaffarnagar on Sunday, turned out to be a massive show of strength of farmer unity as over 300 farmer unions from 15 states participated under the aegis of the Sanyukt Kisan Morcha (SKM) and reiterated their resolve to continue with the protest.

The farmers unanimously gave a call for complete Bharat Bandh on September 27 in protest against the three contentious farm laws.

They (the Centre) said that only a handful of farmers are protesting. Let them see what a handful this is today. Let us raise our voices so it reaches to the ears of those sitting in Parliament, the farmer leaders said.

The farmer leaders said that the Mahapanchayat will also prove that the agitation has the support of "all castes, religions, states, classes, small traders and all sections of the society".

The SKM said in a statement, "The Mahapanchayat today will make the Modi and Yogi governments realise the power of farmers, farm labourers, and supporters of the farm movement. The Muzaffarnagar Mahapanchayat will be the biggest ever in the last nine months."

'Who are accused, whether arrested or not': SC seeks answers...

Israel embassy blast case: NIA yet to get input on 2 suspects...