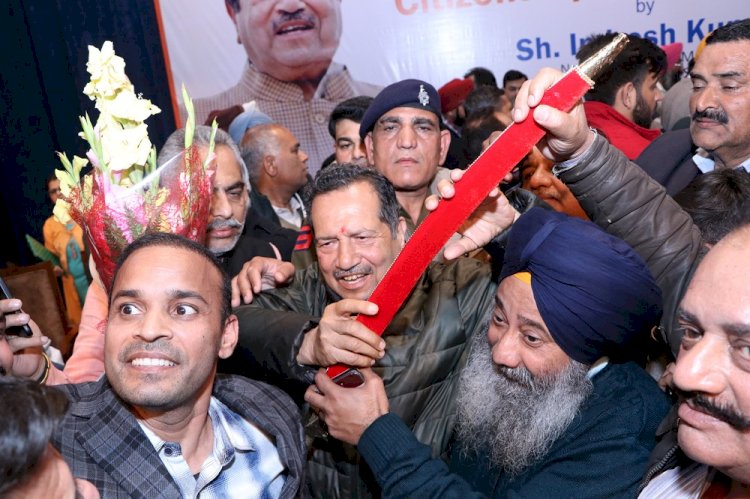 Chandigarh: The national executive member of Rashtriya Swayamsevak Sangh Indresh Kumar today's said that Congress was making false propaganda regarding the citizenship Amendment Act. He said that this was not connubial rather it was an amendment in the existing act. He said this while presiding over a seminar held by Joshi Foundation at Sector 37 a Law Bhavan in Association with Bharat Tibet Sahyog Mandal and fans.

He added that the rules have been relaxed for refugees from Muslim countries who were coming to India. Earlier the condition to get Indian citizenship was that one had to stay in the country for a period of 11 years whereas now as per the new amendment this time period has been reduced to 5 years.

He added that those opposition parties which were raising hue and cry over the amendment should realise that Hindu, Sikh, Parsi, Buddhist and people of other religion staying in the Muslim countries facing lot of hardships. He added that the amendment will make it easier for non Muslims from Muslim countries to come to India and get citizenship. He added that as per the international figures non Muslim living in the Muslim countries were being tortured. He started his speech with tributes paid to the Martyrs of Pulwama attack. He added that it was due to the efforts of Narendra Modi that India gave a befitting reply to Pakistan for its Pulwama attack. He said that by putting an end to the hideouts of terrorists, the Indian Army has proven that those creating terrorism will be dealt with an iron hand. It is due to the capability of Modi government that the entire world has rejected nefarious designs of Pakistan and China.

The national vice president of BJP Avinash Rai Khanna said that with the CAA the Modi government has made it easier for refugees to get Indian citizenship. He added that he had several such problems pending which proves that the earlier Act was not enough to deal with problems of Muslims. It was due to the amendment introduced in the Act that now non-muslims from Muslim dominated countries living in India, can find citizenship in India.

Too many contenders delays Cong list of district chiefs...