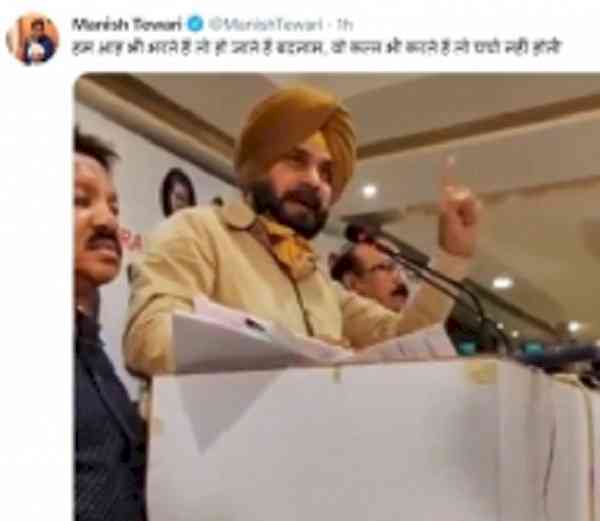 New Delhi, Aug 28 (IANS) Prominent leader of the G-23 group in the Congress, Manish Tewari is upset over the party's silence on Punjab Congress President Navjot Singh Sidhu, who has used threatening language against the party.

Sources close to Tewari said that last year in August when the group of leaders wrote a letter for the betterment of the party, they were called traitors, but now no action was being taken against Sidhu.

Tewari tweeted the video of Sidhu on Saturday, who is saying that if not allowed he will destroy it "eent se eent baja denge".

Last year on August 23, leaders including Tewari wrote a letter to Sonia Gandhi for a 'visible and effective leadership and elections for th block to CWC level which were still pending.

Sidhu speaking at a party function in Amritsar city on Friday, said, "If he is allowed to work according to his own policy of hope and faith, he will ensure the Congress rule in the state for 20 years".

"But if you don't allow me to make decisions, then I can't help anything," Sidhu said without mincing words.

Speaking about the Punjab model, Sidhu said, "Punjab model means people make policies for trade, industry and power. Giving power of people back to the people."

Meanwhile, even Amarinder Singh's confidante and Cabinet minister Rana Gurmit Singh Sodhi hosted a dinner at his residence on Thursday.

A total of 58 MLAs and eight MPs attended the dinner and expressed their confidence that the party would win the 2022 polls under the leadership of Amarinder Singh.

"The journey has started today," Sodhi informed in a tweet.

After Sidhu's threat, Harish Rawat General Secretary in-charge of Punjab met Sonia Gandhi on Friday and apprised her of the issues.