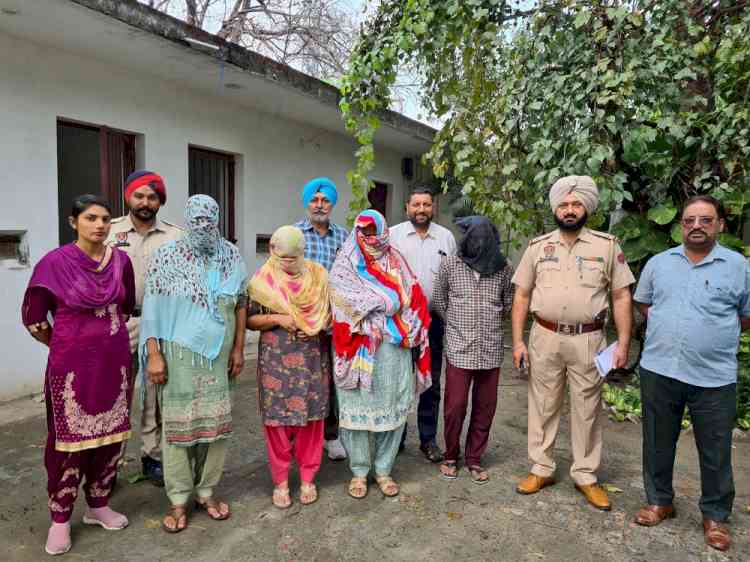 Ludhiana, October 25, 2021: The Commissionerate Police on Monday busted a women snatchers' gang that was active in various parts of the Punjab and Haryana by arresting four including three women and a man besides seizing gold bangles, bracelets, chain and swift car.

The arrested accused have been identified as Jeeto (60) of Jalaan village in Sangrur, Goga (45), Rajji (40) of Sheetanwal village and and Sukhchain Singh (38) of Rauti Shanna village in Patiala.

Addressing a press conference, Commissioner of Police Gurpreet Singh Bhullar said that  Jeeto is kingpin of the gang and has been facing four criminal cases in various police stations. She is also a proclaimed offender. Goga has been facing six cases  and three cases and one case is already registered against Sukhchain Singh and Rajji respectively.

Revealing about modas operandi, Jeeto along with Goga and Rajji used to lure elderly women especially on the pretext of offering them lift or engaging the targets in a friendly conversation, claiming to be acquaintances or relatives.

He said the gang had committed more than 100 snatchings in Ludhiana, Jalandhar rural, Amritsar, Kartarpur, Moga, Khanna, Jagraon, Hoshiarpur and as well as in Haryana state.

Bhullar told that CIA staff -1 was entrusted to nab the accused following which the team conducted the probe of such cases in a professional manner and zeroed in on the accused by getting sufficient details about their activities.

He said that got the tip-off and laid a trap at Goanspur village in Malerkotla district and apprehended them.

He said that the cops have also seized eight gold bangles, two gold bracelets, one gold chain, swift car used in crime, fake RCs and Registration plates and others.

Commissioner of Police added that the gang had involved in 11 such incidents in the jurisdiction of city police and all cases have been solved.

Bhullar lauded the CIA staff-1 team and announced appreciation certificates for the cops who busted the gang.

DC, CP and SSP give final touches to arrangements for cabinet meeting and progressive...