Commissioner of Police urges residents to get connected with Mission Fateh 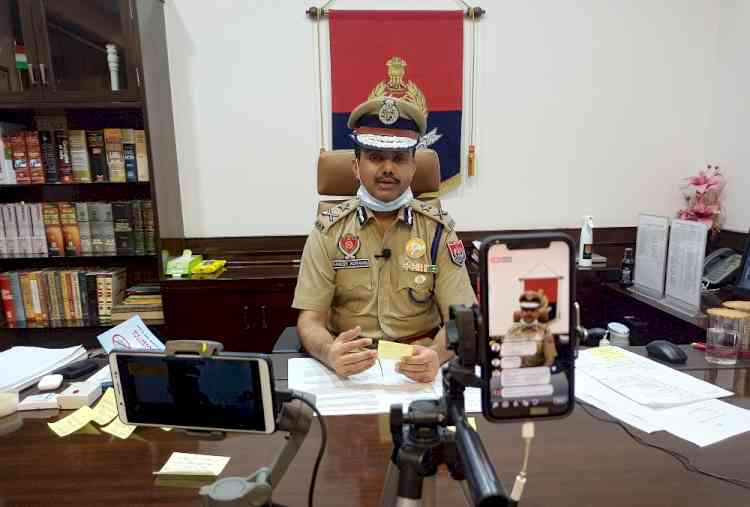 Ludhiana: Commissioner of Police Ludhiana Mr Rakesh Kumar Agrawal today appealed to the city residents to get connected with the Mission Fateh of the Punjab government and should also urge others to get connected with this special campaign. He said this during his Facebook live session, where he was answering to various queries of city residents.
While providing information related to Mission Fateh in detail, Commissioner of Police Mr Rakesh Kumar Agrawal said that to become part of Mission Fateh campaign, people should download COVA app on their mobile phones. He said that the persons registering themselves on COVA app would have to upload their photograph, and their selection would be done at state level. He said that upon their selection, their list would be shared with the District Administration, so that they can be awarded with t-shirts and badges. He informed that the registration has already started on the COVA app and people can also get connected with Mission Fateh by giving a missed call on phone number 9465339933.
He informed that as per the orders of the Punjab government, complete lockdown would be implemented on Saturday and Sunday (June 20 & 21, 2020), and that is why, people should prefer to stay indoors. He warned that any person violating the government directions regarding COVID 19 would be challaned and if people want to go out of their homes for some emergency, they should get e-pass through COVA app.
Earlier, District Public Relations Officer Mr Prabhdeep Singh Nathowal and Assistant Public Relations Officer Mr Puneet Pal Singh Gill honoured the Commissioner of Police with Mission Fateh Warrior badge at his office. Besides, badges were also distributed amongst all the personnel and officers of Police Commissionerate Ludhiana. /(June 19)

Punjab inks MoU with survey of India to prepare inventory...

PAUTA participates in kisan dharna at Delhi to support...