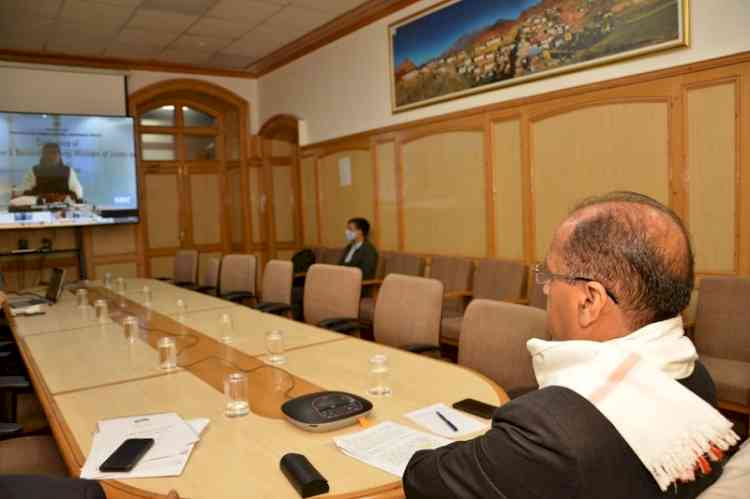 Dharamshala: “The Institute of Himalayan Bioresource Technology Palampur near Dharamshala  has been playing pivotal role in undertaking COVID-19 tests besides providing all necessary instruments and logistic support for test of COVID-19 to Tanda, Chamba and Hamirpur Medical Colleges of the State,” said  Chief Minister Jai Ram Thakur while addressing the Council of Scientific & Industrial Research- Institute of Himalayan Bioresource Technology (CSIR-IHBT), Palampur on its 38th Founders Week function through Video Conference from Shimla today.
The Chief Minister said, “The Institute had also succeeded in preparing alcohol free hand sanitizer and herbal soap to the consumers. Institute is also playing a major role in making Himachal Pradesh as Aroma State of the country by production of aromatic oil from various plants.”
Jai Ram Thakur said that the efforts of Cultivation of Heeng and Kesar by the Institute were indeed laudable. He said that the State Government has started a Rs. 4.50 crore Heeng project and rupees five crore Kesar Project. He said that the State Government would provide all possible help to the institute for making these projects a success. He said that efforts were being made in a big way to promote organic farming. He said that the production of Heeng and Kesar would prove a game changer to the farmers in strengthening their economy.
Chief Minister said, “ the commercial cultivation of herbs and medicinal plants would go a long way in strengthening the economy of the farmers, these products fetch better prices and also make India a self reliant country. The State Government would provide all possible help for the research being undertaken by the Institute.”
Jai Ram Thakur released publications of Institute Bamboo Resources at CSIR-IHBT and Tea Germplasm at CSIR-IHBT on the occasion.
Chief Minister also inaugurated Protein Processing Centre and also laid foundation stones of Tissue Culture Unit and Hi-Tech Nursery of Bamboo on the occasion.
The Chief Minister also planted a Tricoma tree sapling on the occasion.
Director CSIR-IHBT Dr. Sanjay Kumar welcomed the Chief Minister and presented a report of the Institute.  He said that the Institute has been ranked 9th out of the 38 CSIR institutes of the country by SCImago International.
Principal Secretary Agriculture Onkar Sharma, Special Secretary Agriculture Rakesh Kanwar and other officers were present on the occasion.

1-year compulsory army training should be given to bureaucracy: Mankotia

“UNITED AGAINST COVID-19”, THE UNITED WAY OF HYDERABAD’S...