Farmers should bring their produce in mandis only as per their turn: Dakha 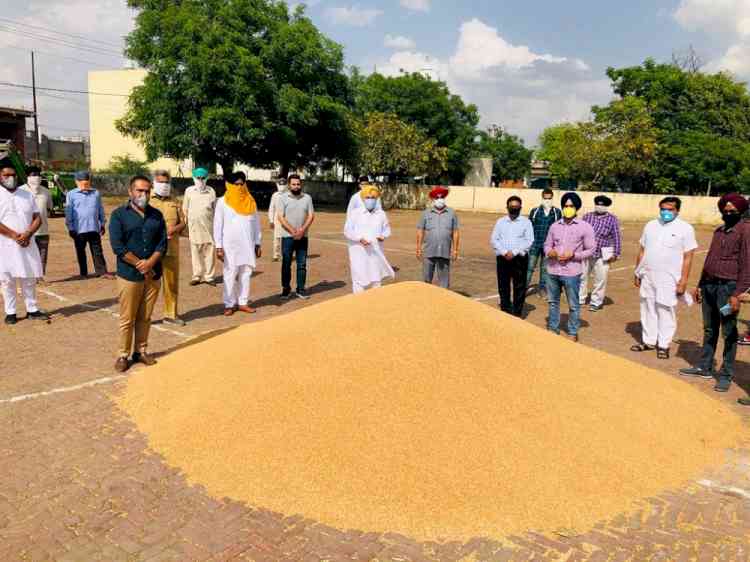 Jagraon/Hathur (Ludhiana): District Planning Board Chairman Mr Malkit Singh Dakha today inaugurated the wheat procurement at Asia’s second biggest grain market in Jagraon and at grain market of Hathur. He was also accompanied by Senior Congress leader Mr Karanjit Singh Galib, Secretary Mr Gurmeetpal Singh Gill, Arhtiya Association District President Mr Raj Kumar Bhalla, AFSO Mr Beant Singh, Mr Surjit Singh, Mr Mani Garg, Mr Avtar Singh, Mr Kuldeep Singh, besides several others.
While providing information, Mr Dakha said that this time, due to the Novel Coronavirus (COVID 19) pandemic, the farmers would be able to bring their produce in the Mandis only as per their turn.
He informed that as per the directions of the Punjab government, lockdown/curfew is enforced in the district. He said that as per the directions, the district administration would ensure that there is no rush of farmers in the Mandis. He said that for this purpose, the farmers would be issued token passes, and it would be on the basis of these tokens that the farmers would be able to bring their produce in mandis. He said that the arhtiyas would ensure that the farmers bring their produce in the mandis as per their given schedule.
He informed that the officials have been directed to ensure that arrangements of cleanliness and other facilities are made in the mandis. He informed that the arhtiyas and labour have been given training regarding hand washing, wearing masks, maintaining social distancing and use of sanitiser etc by the officials of Mandi Board. All this material would be provided to the Labour by the arhtiyas. He said that the arhtiyas would ensure that the farmers and labour wash their hands every half an hour.
Mr Malkit Singh Dakha appealed to the farmers that they should not panic as the Punjab government would procure every single food grain from the farmers. He informed that the Capt Amarinder Singh led Punjab government has made elaborate arrangements in all mandis of the state. Later, he also visited other mandis of the area and supervised the ongoing wheat procurement there.