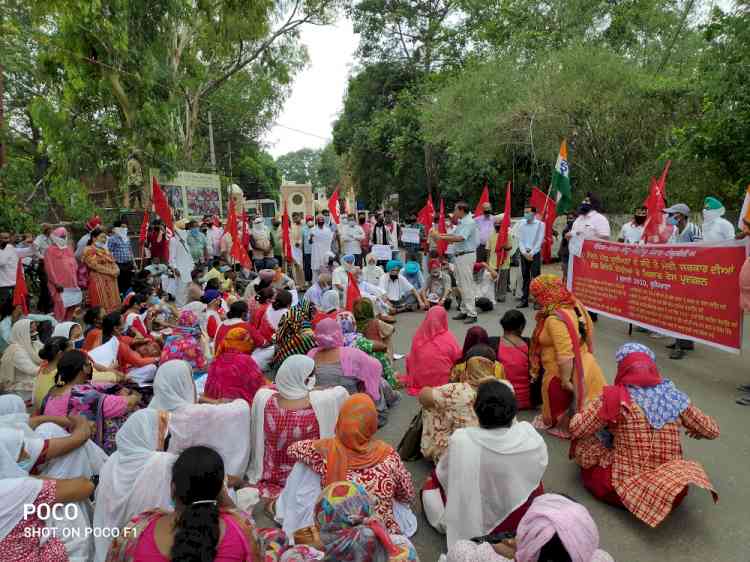 Ludhiana: The trade unions including INTUC, AITUC, CITU and CTU  organized a protest rally and demonstration form Punjabi Bhawan to at the mini secretariat today to protest against the draconian changes in the labour laws and governments total apathy towards the workers in this hour of extreme crises due to loss of jobs, livelihood which has pushed them into abject poverty and hunger. The rally was presided over by a presidium including  Baldev Modgil, Ramesh Rattan, Sukhminder Singh Lotey and Ghansham.

Speakers at the rally said that the BJP ruled states UP, Karnatka and Gujarat have made draconian changes in the labour laws which will make the workers virtually as slaves/ bonded labourers. Codification of 44 laws into 4 codes will lead to snatching away of 80% rights of workers. Change of timings from 8 hours to 12 hours will put excess burden on workers. With this they would be pushed into abject poverty. The domestic workers who are mainly women are at a receiving end at this time as they have been asked to stay out by many families and they remain unpaid. By freezing of DA of central government employees and DR of  68 lakh pensioners the government has taken away 70,000 Crore rupees from their pockets. Privatization of PSUs and 100 % FDI in railways, defence, insurance,  port and dock and banking sector is total sell lout of the nation’s assets. Dangerous electricity bill 2020 will seriously affect the consumers.  Increase in Diesel and Petrol prices despite fall in crude oil price in international market is blatant highhandedness of the government.

New agriculture laws will have devastating effect on farmers...