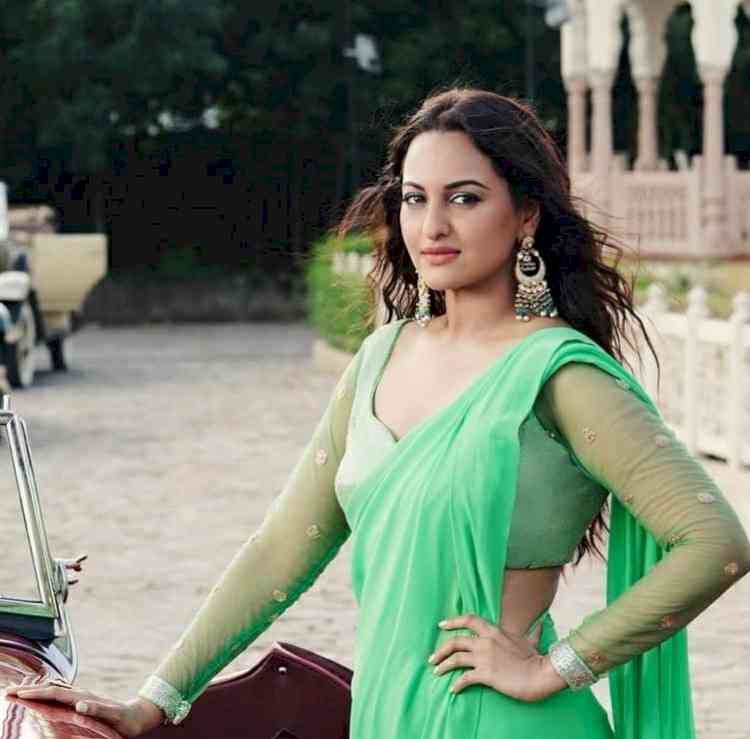 Dabangg franchise has drawn the nation's biggest fanfare and has ruled the box office throughout! The massy masala entertainer that revolves around the most loved cop Chulbul Pandey a.k.a Robin Hood Pandey is here to, once again, whisk you away with his heroic punches and quirky world in the World Television Premiere of Dabangg 3 this 25TH October at 12 noon only on Zee Cinema. Directed by Prabhu Deva, the film stars Salman Khan, Sonakshi Sinha, Mahesh Manjrekar, Arbaaz Khan and the beautiful debutante, Saiee Manjrekar. Dabangg 3 showcases Chulbul Pandey’s origin as a police officer, after his encounter with an old rival named Bali Singh refreshes his memory and how he deals with this situation to protect his loved ones. Sharing her experience on playing the role of Rajjo Pandey and being a part of the Dabangg franchise, the glamourous Sonakshi Sinha on occasion of the films World Television Premiere says:

Being the only actress to have starred in all the franchise of the film, how does it feel?

Dabangg is home to me, I started my career in the industry with this film and am glad to have been an integral part of this franchise as it grew. It's an honor for me and I am grateful for everybody, especially Salman Khan, for showing that faith in me to play the role of Rajjo and giving me my first break. Dabangg is one of the franchises that has got tremendous success throughout and it feels great to be a part of that journey and build it along the way.

How has your experience been working from Dabangg 1 to be working in Dabangg 3?

Dabangg is one such entertaining film that in each franchise we had a blast working together. However, in the first film, of course I was new to the movies, and was more focused on learning every bit of it and getting the hang of things while in the following movies, I had gained some experience so I was more confident. Plus, with each installment, I got more closer to my character ‘Rajjo’, understood and have portrayed her character with more ease. Over the years, Raajo’s character has also seen a change from a straight-forward daughter to a fun loving and protective wife, daughter in law and mother. So, there has been a change in her character traits as well, hence there was something new with every installment for me.

Why do you think Dabangg is the ultimate entertainer that suits any kind of audience?

I believe that the audience likes a film either when they personally resonate with the characters and situations shown in the film or when they see an aspirational character. Dabangg stormed in with both relatable and aspirational characters and situations. The franchise has the best of everything from action, drama, comedy to even romantic sequences. With Dabangg 3, the entertainment and masala quotient gets bigger and better as while it revolves around the heroic antics of the famous cop ‘Chulbul Pandey’, it also transcends the viewers into his backstory as to what led him to become today’s Chulbul Pandey a.k.a Robin Hood Pandey. And, how things take an unexpected turn when his past comes to haunt him in the form of Bali Singh, the villain of the movie making it a perfect wholesome family entertainer.

How did you like Prabhu Deva’s vision of Dabangg?

I have enjoyed working with prabhu sir. Having worked with him for over 3 films, he has always been so dedicated and is a live wire on the set. His energy perfectly matches Dabangg’s. I think nobody could have done more justice to the much-needed origin story of Chulbul than Prabhu sir. He has got the grip over Indian audience’s taste and preference when it comes to masala movies and I envy that about him. Working with him is always an enriching and fun experience!

Rajjo emerging as a strong woman over the years

Rajjo is the quintessential, sweet and strong wife and mother that we see in almost every indian household. She binds the family together and stands true to her opinion and her relationship with Chulbul is my favorite part about her character. Their chemistry is class apart and very different from the usual.

What makes you celebrate Dabangg 3 even today?

I believe in going with the flow, and I have always been like that. And I’m glad Dabangg came my way. As I mentioned Dabangg is where I found my calling and started my career with, it is always going to be special. The fact that the film got so much love and appreciation, so much so that it demanded an origin story, fills me with gratitude for everyone who made Dabangg happen for me! So, I can’t celebrate just one film from the franchise, it's Dabangg that helped me build my identity in the industry, celebrating Dabangg is like celebrating my career and with every installment it just keeps getting bigger and better!

This week get to experience thrill and excitement