“Irrfan Khan, The Man, The Dreamer, The Star” is penned by Aseem Chahbra 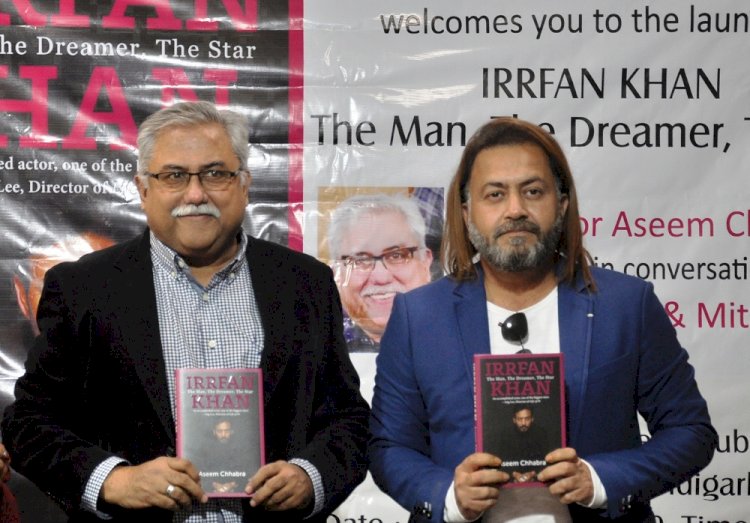 (L-R) Author Aseem Chhabra with Chairman of Adab Foundation at the unveiling of the book on actor Irrfan Khan -'Irrfan Khan ,The Man, The Dreamer, The Star.'

Chandigarh: After penning biographies on actors Shashi Kapoor and Priyanka Chopra renowned author Aseem Chhabra has now come out with a book based on actor Irrfan Khan. The book titled “Irrfan Khan, The Man, The Dreamer, The Star” was unveiled at Press Club, Sector 27, here. The book was released by the author and Mitul Dikshit, Chairman , Adab Foundation. The book launch event was organised by the city based NGO 'Adab Foundation' which works for promotion of the arts & literature in the region.

Drawn from personal interviews and told through many voices, author Aseem Chhabra, who is a freelance writer based at New York traced down renowned Indian Actor Irrfan Khan’s personal and artistic life in its many shades.

Speaking on the occasion Aseem said, “After writing two books on Indian celebrities, I was looking for another interesting actor’s life to explore. Among other things, what attracted me in Irrfan is a parallel career, as he has also acted in Hollywood apart from Bollywood and is admired well by the audience.”

Mitul Dikshit said, "Adab Foundation keeps organising pertinent events related to art, photography, performing arts, literature etc. Under the aegis of Adab Foundation the Chandigarh Literature Festival is held every year. The book on Irrfan Khan was unveiled formally by conducting an interactive session   on the same which saw the author in discussion with me and a senior journalist from this region - Shayda Bano, who is also a part of Adab Foundation."

Added Aseem, “I have been a big fan of Irrfan Khan since I saw him in his early films –Haasil, Maqbool, The Warrior and his other key Indian films, The Namesake, The Lunchbox, Piku and Talvar. So, the book celebrates Irrfan Khan through his work while also tracking his personal life and his passions whether for acting or flying .”

Asked about the challenges he faced while writing this book, Aseem said, “The biggest challenge was that I started working on the book around the time Irrfan had shifted to London to get medical treatment for neuroendocrine tumour. While I was in touch with him in 2018 and he knew I was working on this book, I was not able to interview him. But it helped that many directors, actors and friends of Irrfan were willing to talk to me.”

Talking about his first interaction, Aseem said that in the fall of 2006, I was in Queens, New York, walking to the subway station near my home. When I took the call, the person at the other end asked, “Hello!! Is that Aseem Chhabra?’ I responded yes and he then added ‘Sir, main Irrfan Khan bol raha hoon, Mumbai se (Sir, I am Irrfan Khan calling from Mumbai).”

I was standing on a street corner, with cars and buses passing by and Irrfan Khan was on the phone with me. He had read a profile I had written on Mira Nair in which I mentioned I had seen The Namesake. Earlier in September, I had attended the world premiere of the film at the Telluride Film Festival. Irrfan was in India and he had yet to see the film. And so he wanted to hear from me what I thought of the film. I told him that I loved it and his performance had made me cry.

Eventually I met him face-to-face when he came to New York the next year to promote A Mighty Heart.

Aseem summed up, “244 pages book is rich in detail and peppered with anecdotes, which depict the life and work of the actor that begins in a small household in Rajasthan and culminates in his face gazing down from billboards in Hollywood.”

One more positive case found in Tarkhankhadd in Kangra:...

Storm, rain uproot trees, electric poles in and around...