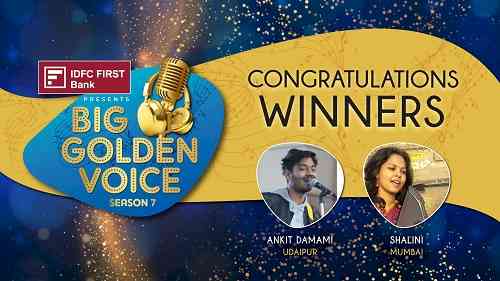 In what proved to be a memorable journey for all music enthusiasts, BIG FM, one of India’s largest radio networks, announced Dr. Shalini and Ankit Damami as the winners of the 7th season of its on-air singing reality show ‘BIG Golden Voice’. Presented by IDFC FIRST Bank, the prestigious property featured musical sensation Himesh Reshammiya as the celebrity judge for the latest season, who not only mentored the participants at each and every stage but was also seen supporting and encouraging them throughout their journey in the competition.
The talent hunt sought participation from across the country as it provided budding singers a platform to showcase the best of their musical prowess. The contestants were selected through multiple rounds, with local station-level auditions being held first to select city-wise winners. Since the competition was held across Big FM’s massive network of 58 cities, their wide reach helped discover amazing talents from different regions. The format of the property saw 58 city finalists being chosen by local celebrity judges from each of the cities that BIG FM currently operates in. Some of these judges included singers Akasa Singh in Delhi, Divya Kumar in Mumbai and music composer Gurmoh in Chandigarh amongst others. This was further narrowed down to select only the ‘Top 7’ finalists, commemorating IDFC FIRST Bank’s highest savings bank interest up to 7%. The seven finalists further competed against each other with five being selected to battle it out for the top 3 positions in the grand finale.
The show also witnessed these top 7 contestants talking about their experience and journey throughout the competition on-air. After a rigorous competition, Dr. Shalini from Mumbai and Ankit Damami from Udaipur emerged as the winners. With popularity spanning the length and breadth of the country, the singing reality show received more than 10,000 entries making it the biggest audio entertainment show in India.
Commenting on the culmination and announcement of the winner of season 7 of BIG Golden Voice, a spokesperson at BIG FM, said, “BIG Golden Voice is a platform that is not only known for bringing out the best of musical talents to the forefront but also plays a telling role in mentoring and guiding them towards the path of fame and success. Season 7 witnessed some incredible talents putting forth their best while conquering the hearts of our listeners through their melodious voices. We are glad to have IDFC FIRST Bank on board as they have been an amazing partner in this beautiful melodious journey. This year witnessed such stiff competition that we decided to choose two winners. We extend our heartfelt congratulations to both the winners and wish them all the best for their future endeavors.”
Talking about the winner and the season’s culmination, well-known singer Himesh Reshammiya said, “It has been an amazing journey for me. I cherish each and every moment of being a part of this phenomenal show which continues to receive immense love and support from music lovers across the country. Guiding, mentoring and selecting the participants wasn’t an easy task for me as each one of them was so good in their own unique way. I am happy for Shalini and Ankit who have emerged as the winners of this season and really looking forward to work with them in a music video.”
Speaking on winning the title, Shalini said, “I am really happy to win the title. I have been singing and performing since I was a teenager and winning such a prestigious competition make me feel like all the hard work I have put in all these years has finally paid off. To learn and perform in front of Himesh Reshammiya was an altogether different experience. I really thank him for the guidance and support he extended to me and other participants. I am looking forward to working with him in the music video.”
Speaking on winning the title, Ankit Damami said, “I am delighted to be a winner of the show. I have been learning music for the last 4-5 years and have won few titles as well, but to be on this platform was a unique experience. I am thankful to all those who supported me in this beautiful journey that has taught me a lot of things that I shall surely take forward. Himesh Sir was simply amazing and I can’t thank him enough for all the learning and guidance he offered. I am eagerly waiting to work with him in the music video.”
The competition witnessed the best of diverse singing talents come under one roof as they battled between themselves to win the grand prize along with an once in a lifetime opportunity to feature alongside Himesh Reshammiya in an exclusive music video. As the biggest audio entertainment show in India, the property, over its previous seasons has featured an esteemed lineup of judges which includes Abhijeet Bhattacharya (Season 1), Shankar Mahadevan (Season 2 & 3), Mallik Brothers - Armaan and Amaal Mallik (Season 4), Anu Malik (Season 5) and Sonu Nigam (Season 6) among others, who have not only amplified the show’s popularity but have also played an imperative role in recognizing the best talent for the industry at large.