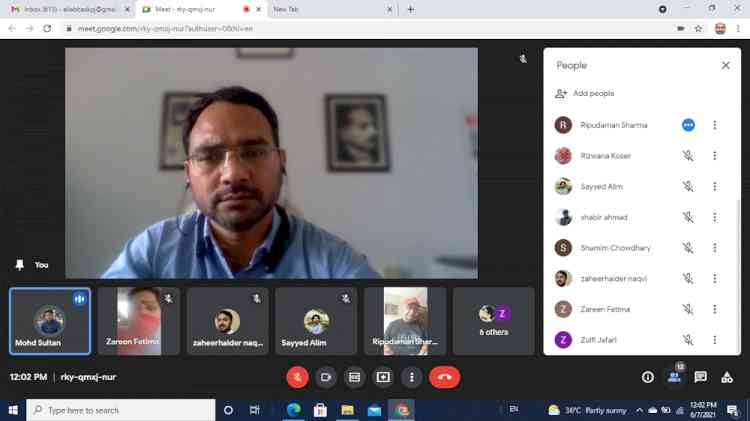 The 6th online meeting of the Bazam-e-Adab being organized by the Urdu department of Panjab University, Chandigarh today.

Chandigarh: Destiny deported  Panipat to influence the course of our Political and literary history in a big way, said Dr. Ali Abbas, Coordinator of the Department of Urdu, Panjab University, Chandigarh while speaking at the 6th online meeting of the Bazam-e-Adab organized by the Urdu department here today, Dr. Ali Abbas Said that Babur laid the foundation of Mughal empire in India after the first battle of Panipat in 1526.  Akbar provided stability after the second battle of Panipat in 1556 and the Marathas were annihilated in the third battle of Panipat in 1761 by Ahmed Shah Abdali.  “On the political front all these three battles are very important as they changed the course of our history”  he added.

According to Dr. Ali Abbas, it was Panipat again but this time on the literary front when it played the all important role in the flourshment of Urdu language in Punjab in particular and in India in general.  Firstly, Afzal Panipati introduced Baramasa in the domain of poetry.  Secondly, around 1857 Hali Panipati, versatile genius and a great disciple of legendary Urdu poet Mirza Galib opened vistas of  new disciplines including literary criticism and mushairas in the domain of Urdu literature.  Thirdly, there is yet another Panipati, popularly known as Wahidudeen Saleem Panipati whose tremendous contributions have already earned him pride of place.

In her presidential address Prof. Rehana Parveen (Retd.) said that the Political history of India & literary history of Urdu literature would remain incomplete without mentioning the name of Panipat.

Mr. Mohd. Sultan, a research scholar in his paper elaborated that the colossal contribution  of Saleem Panipati to various disciplines of Urdu literature shall always be held in high esteem by the coming generation.

Ms. Rizwana Koser, a research scholar in the Urdu department proposed the vote of thanks.

Lockdown diet:  Nutritious foods that must be a part of your child’s diet

9 MBA students of DAVIET placed with Jaro Education at...