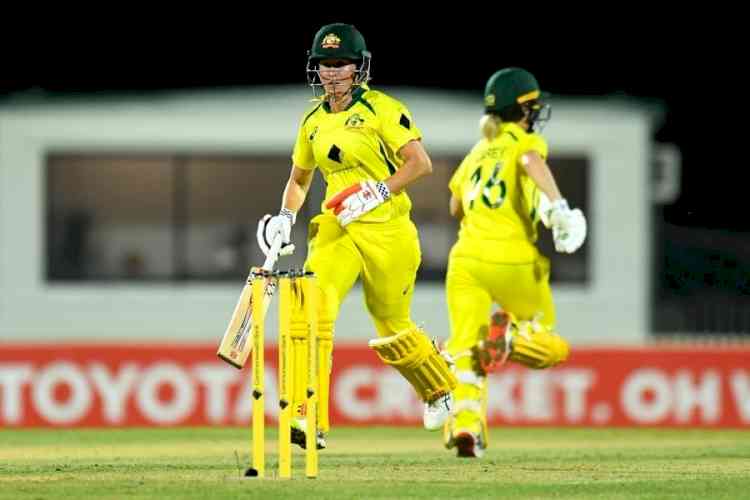 Mackay (Australia), Sep 24 (IANS) Australia mounted a brilliant chase of India's 274/7 and rode on an unbeaten century by opener Beth Mooney (125*) to win the second ODI by five wickets in a dramatic last-ball thriller.

Chasing 275 to beat India in the second ODI at the Harrup Park and extend their 25-match win streak, Australia rode a superb century by Mooney, promoted to open the innings in place of an injured Rachael Haynes, and an equally vital contribution from allrounder Tahlia McGrath (74) to recover from a precarious 52/4 to reach 275/5 in 50 overs and take an unbeatable 2-0 lead in the three-match series. Australia thus extended their winning streak in women's ODI cricket to 26.

Australia got off to a poor start in their chase of India's highest ODI total as Jhulan Goswami castled Alyssa Healy for a duck in the third ball of the innings with an inswinger.

A splendid running catch from Rajeshwari Gayakwad brought an end to captain Meg Lanning's innings (6) -- Meghna Singh, who bagged her first international wicket, getting rewarded for some brilliant bowling in her first two overs.

India found further success when a magnificent direct throw from the young Pooja Vastrakar caught Ellyse Perry (2) short of her crease in the 10th over, reducing Australia to 34/3 in the first Powerplay. In contrast, India were 68 for no loss in their first 10 overs.

Australia found themselves at 52/4 when Ashleigh Gardner (12) edged the ball straight to Yastika Bhatia at slips off Pooja Vastrakar.

With the hosts still needing 223 runs at that point, India looked on its way to levelling the series 1-1 but Beth Mooney and Tahlia got together to pull off the rescue act. Mixing caution with aggression, the two brought up their respective fifties and brought their team back into the game.

The 126-run stand came to an end after Tahlia (74) failed to put away a poor short ball on the legs and found Yastika at short fine. Beth continued to keep the scoreboard ticking and brought up her second ODI century.

The equation came down to 13 runs off the last over and Jhulan, the most experienced bowler in the Indian camp, was trusted to defend it. Though she did not concede a boundary, good running between the wickets coupled with a few extras brought it down to three off the last ball.

Jhulan bowled a full toss that went straight to the hands of the square leg and sparked celebrations from the Indian team. Upon review, the third umpire decided that the ball was above waist height and called it a no-ball. Needing two runs off the last ball, Nicola Carey (39*) hit it to long-on and completed a double to keep Australia's win streak alive.

Earlier, openers Smrithi Mandhana and Shafali Verma got India off to a quick start, putting up 68 without losing a wicket as the visitors went on to score their highest ODI score. Left-arm orthodox bowler, Sophie Molineux broke India's first-wicket partnership at 74 runs in the first ball of the 11th over, when Shafali (22) played on to her stumps.

India lost their second wicket when skipper Mithali Raj (8) was run-out after confusion between the batters who were caught ball-watching.

At the other end, Smriti, who seemed in great touch from ball one, scored her 19th ODI fifty and was also the top scorer for India. Smriti took the attack to Darcie Brown, who got her in the first ODI and scored five out of the 11 boundaries against her.

Smriti (86), who looked set for her fifth ODI hundred, was caught out by Beth Mooney off Tahlia at point, like the way she got out in the first match and through solid contributions by Richa Ghosh (44) and Deepthi Sharma (23) made sure that India didn't lose momentum. A 53-run partnership between Jhulan (28*) and Pooja (29) towards the end of the innings saw the visitors post a healthy total of 274/7, which was the highest against Australia in their last 25 ODI matches.

However, in the end, it did not prove sufficient as Australia won off the last ball.

Tahlia McGrath (3/45) was the pick of the bowlers for Australia, snaring the wickets of Mandhana, Sharma, and Ghosh. Sophie.