The motive was to raise awareness on cancer among women 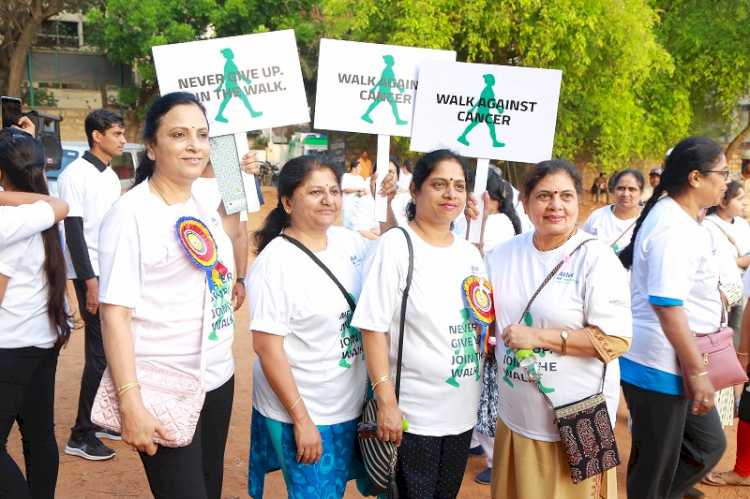 Bangalore: In an effort to show solidarity with women fighting cancer this International Women’s Day, Aster RV Hospital organized a 3 km ‘Walk against Cancer’ in association with Amruthavarshini Mahila Sangha. The event saw participation from more than 250 citizens from all walks of life, including cancer survivors, fighters and working professionals. As a part of the initiative, the hospital announced special consultation and discount packages for all the participants. Ms.  Malathi Somashekar, Corporator and Mr. Laksmikanth, a social worker, were also part of the event to support the cause.
Dr. Sunil Eshwar, Lead Obstetrics & Gynecology, Aster RV Hospital addressed the participants, “Breast and cervical cancers are detected in third or fourth stage whereas in most developed countries these are found and treated while the cancer is still in the first or second stage. This International Women’s Day, we urge our women to pay attention to early signs of cancer such as lumps on the breast, unusual nipple discharge, sharp pain or dimpling in the breast, unusual menstrual bleeding or vaginal discharge, or painful sexual intercourse and seek advice for it.”
Ms. MJ Bharathi, President, Amruthavarshini Mahila Sangha, “Women are pillars of the society and if she can take care of her health, she takes care of society also. We look forward to participating in more such awareness programs for our women in the future.”
Ms. Muktha Girish, Secretary, Amruthavarshini Mahila Sangha, “It is the need of the hour to encourage and support all women to pay attention to their health as this is a crucial part of her well-being and growth in society. The event was a great success.”
The walkathon began at National College with a Zumba session and ended outside Aster RV Hospital with a cool down session by the physiotherapy team.