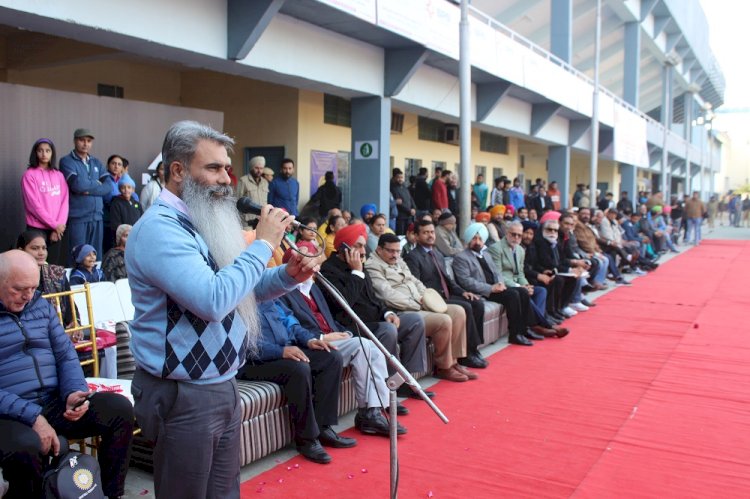 Ludhiana: Punjab Food, Civil Supplies & Consumer Affairs Minister Punjab Mr Bharat Bhushan Ashu today said that the Capt Amarinder Singh led Punjab government is carrying out overall development of the state in a systematic manner. He said that in the coming days, Sports would play a pivotal role in changing Punjab. He said this after inaugurating 70th Senior National Basketball Championship at Guru Nanak Stadium, here today.
While speaking on the occasion, Mr Bharat Bhushan Ashu said that the Punjab government is committed for providing best sports facilities to the youth. He said that several initiatives under Mission Tandrust Punjab of the state government have been started, under which the youth, are being motivated to make sports as a part of their daily routine.
He said that it is a matter of great pride that this championship is being organised in the state for the 9th time. He said that youth should make sports a part of their daily routine as they teach team spirt, unity and discipline in life. He also announced that more such events would be organised in the state in the coming days as well.
Mr Bharat Bhushan Ashu said that several efforts are being made to ensure that Ludhiana has the best sporting facilities for its residents. He informed that a new sports park is being developed at the site which had a dump once in Jainpur village of [district Ludhiana with cost of Rs 40 crore. He also informed that a new athletics synthetic track would be laid at Guru Nanak Stadium, while work on indoor swimming pool would also start shortly. He said that the indoor swimming pool at Rakh Bagh has been a long pending demand of the city residents, and the work on it would commence shortly. He informed that all the sports facilities in the city, including the Shastri Hall, Basketball stadium, Table Tennis stadium, besides all others, would be upgraded with best sports facilities.
He informed that the 70th Senior National Basketball Championship (boys & girls) is being organised at Guru Nanak Stadium Ludhiana from December 21-28, 2019, which is being dedicated to the 550th Parkash Purab celebrations of Shri Guru Nanak Dev Ji. All arrangements in this regard have been completed and all four basketball courts in the stadium have been upgraded with the support of Punjab government.
He informed that 30 teams in boys section while 26 teams in girls section would be competing in this event. He informed that for around 150 matches, 100 technical experts and referees from Basketball Federation of India have been deputed and all the teams have been divided into 6 different groups.
On this occasion, Mr Ashu announced a grant of Rs 5 lakh for Basketball Association.
Prominent among those present on the occasion included former DGP Punjab Police Mr RS Gill, Commissioner of Police Mr Rakesh Kumar Agrawal, DCP Mr Ashwani Sharma, ADC (G) Mr Iqbal Singh Sandhu, Punjab Basketball Association general secretary Mr Teja Singh Dhaliwal, Mr JP Singh, Me Ishwarjot Singh Cheema,  Mr Sukhpreet Singh Aulakh, singer Mr Ravinder Rangoowal, besides several others.
The Ceremony commenced with  29 in Men  24 in women  state units participating in the 70th edition of the National Senior Basketball championship 2019, Indian Railways Women  Kerala and Services Men off to a good Start. Defending Champion in women Indian railways started off with a 141-51 victory over Maharashtra while Kerala beat Karnataka 74-56 on the opening day.
In Men division last year finalist and runner up  Services defeated Kerala 82-70 and Utharakhand  defeated Delhi 77-62.
In the morning league matches Detailed Scores of 1st Day is as under:

Adithi and Sree Sharan conquer the Hyderabad leg of the...