Around 88% of total samples taken in district tested negative of coronavirus: DC Ferozepur

Says, so far 1402 samples out of the total 1586 taken in the district found negative, the result of 128 samples awaited 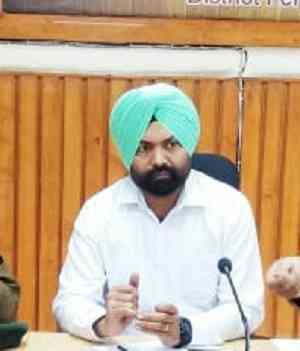 Ferozepur: With 1402 samples tested negative out of the total 1586 samples, the percentage of negative COVID-19 cases was around 88 percent in the district so far, said Deputy Commissioner Ferozepur Mr. Kulwant Singh.

Divulging more, the deputy commissioner said that around 88% of the total throat swab tests conducted in the district to detect Corona Virus were tested negative of CoronaVirus.

Mr. Kulwant Singh further said that as a result of intensified sampling drive till now 1586 samples have been taken in the district out of which 44 were found positive whereas 1402 samples have been tested negative, which was around 88 percent of the total sampling. However, the result of 128 samples was still pending with the laboratories, he added.

Notably, one positive patient Constable Paramjot Singh has already cured of the virus and therefore discharged from the hospital adding the deputy commissioner said that rest 43 active cases of the Corona Virus were undergoing treatment in the local civil hospital. He said that all of the active cases were of non-critical types and having the best of the treatment.

The deputy commissioner said that the district administration had launched a drive to conduct Covid-19 tests of people who had returned from other states. Subsequently, positive tested people were shifted to the isolation ward of the civil hospital, Ferozepur for further treatment, said Mr. Kulwant Singh.

The deputy commissioner called upon the people not to get panicky as the district administration was taking all the necessary steps to win the war against the Coronavirus adding he solicited people's support to contain this deadly virus. He said that the prevailing crisis can be won over by observing the golden principle of social distancing, self-restriction of unnecessary movement, and personal hygiene.

Congress still confronted by a divided house in Punjab