Arjun Kapoor, Rajkumar Rao and Disha Patani to lend their voice to Hindi-dubbed version of Amazon original series The Boys

This Hindi dubbed version of the highly-popular superhero fictional web series will feature these three actors voicing the characters of Billy Butcher, Homelander and Starlight respectively 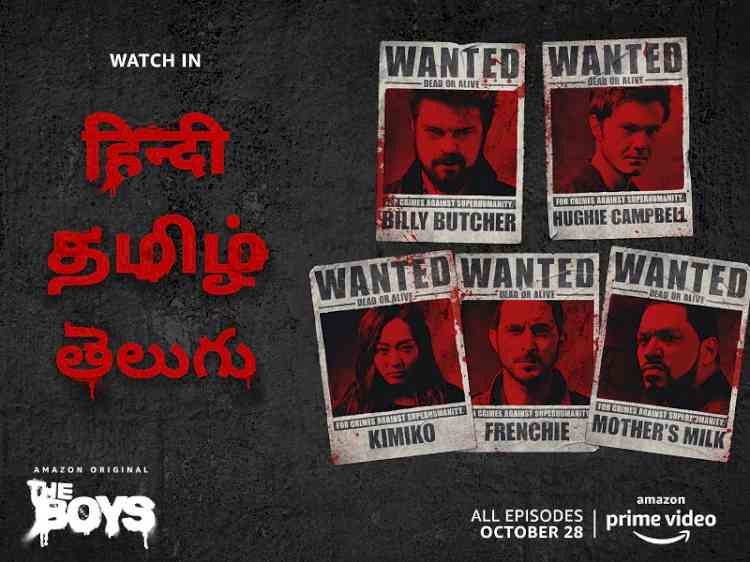 Continuing to garner a resounding fandom from viewers across the world, The Boys, the popular superhero satire series, is all set to present them a desi touch of the show. In a recent announcement, Amazon Prime Video today revealed that they have roped in Bollywood actors Arjun Kapoor, Rajkumar Rao and Disha Patani to dub for the Hindi version of the show. Cast as Billy Butcher (Karl Urban), Homelander (Antony Starr) and Starlight (Erin Moriarty) respectively, the actors are set to bring their own signature flair to the soon to be launched Hindi version of the popular series. Lauded for being unabashed and unsubtle, The Boys is glorious dark-comedy fantasy series-based on the comic book series of the same name by Garth Ennis and Darick Robertson. The superhero satire created a significant fan-base in India with its season one and has returned for yet another phenomenal season 2.

“The response that the first and second seasons of The Boys has received from fans across the world has been nothing short of phenomenal.” Gaurav Gandhi, Director and Country General Manager, Amazon Prime Video India, said, “At Prime Video, we are continuously committed to working towards what our consumers need and the Hindi, Tamil and Telugu versions of “The Boys” is perfectly in line with their demands and expectations and ensures that such a popular show reaches out to a wider and diverse audience. With viewers across the country looking to consume foreign shows in their spoken language, we’re extremely excited to bring popular actors and fans of the series, Arjun, Rajkumar and Disha on board and are excited to see them add their own style these wonderfully wicked characters.”

Voicing the foul-mouth William ‘Billy’ Butcher, Arjun Kapoor said, “I have been a huge fan of the series ever since it released on Amazon Prime Video. The character of Billy Butcher, much like the series, has a unique charm and an impressive character arc. Billy’s wild sarcasm and his alluring ruggedness spoke to me and I can’t be more excited to voice this delightfully-vexed vigilante.”

Ace actor Rajkumar Rao, dubbing for the ‘Seven’s’ leader Homelander, commented, '"The Boys" is one of my favourite series on Amazon Prime Video. It is fascinating to watch Antony Starr as Homelander – an infuriatingly complex character that everyone loves to hate. Voicing for Homelander has been extremely exciting and I hope that the audiences like what I have done with my voice for Homelander. It's been a great experience doing this."

Lending her voice to the sweet, yet powerful, Starlight aka Annie January, Disha Patani said, “Starlight is probably one of the most humane and grounded amongst the Vought army. You can’t help but feel for her. Having said that, she’s not to be trifled with and terrifying when provoked. So when Amazon Prime Video approached me to lend my voice for the character – there really was no doubt in my mind! Dubbing for the character has been such a fun experience and I hope the audiences are able to enjoy “The Boys” along with my character and her journey in the same way I did.”

Along with Hindi, the series will also be dubbed in Tamil and Telugu. The dubbed versions are set to launch on Amazon Prime Video on October 28th, giving the audience yet another reason to once again watch their favourite show! The second season of the Amazon Original Series The Boys premiered on Amazon Prime Video with the first three episodes having released on Friday, September 4.

Vigilance Bureau to observe ‘vigilance awareness week’ to weed out corruption among...

I’d like to advise my fans to always adopt pets instead...

Banke Tera, my song is an homage to Indian Armed Forces,...

Susheela takes a stand as she confesses her love for Pramod...