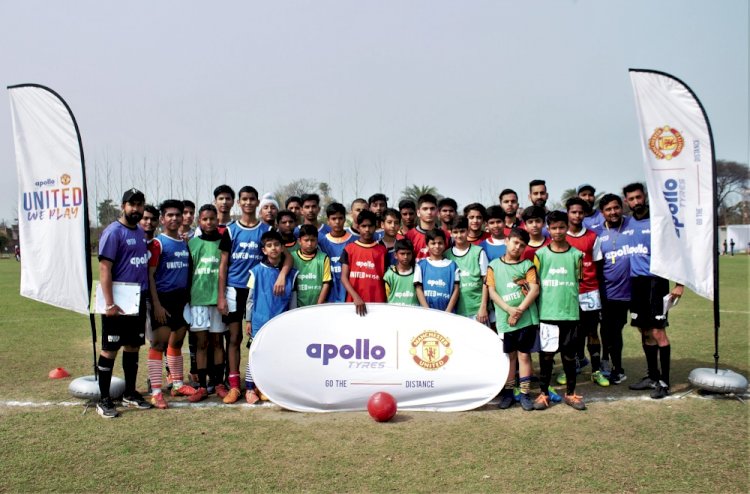 Chandigarh: Leading tyre maker, Apollo Tyres, the Global Tyre Partner to Manchester United, today announced the successful completion of the United We Play programme in Chandigarh, which was held with much fanfare. The selection trials were held at the Minerva Academy FC and the initiative, which comprised of workshops as well as the trials, saw an overwhelming response from budding footballers of the city, with over 400 youngsters participating in the programme.

The United We Play programme is being held in two age groups: U-13 and U-16, with the shortlisted young footballers from Chandigarh getting a chance to impress coaches from the Manchester United Soccer School (MUSS). During this stage of the programme, participants will be taught some of the same skills and techniques imparted at Manchester United.

United We Play is an initiative of Apollo Tyres and Manchester United, aimed at encouraging young football talent from across the country and to give them a platform to showcase their skills. Talented kids will be trained by the Manchester United Soccer School (MUSS) coaches, with the best performers receiving once in a lifetime opportunity to train with the Manchester United’s U-18 team, which will be visiting India for the first time in May this year.

Rajesh Dahiya, Vice President, Marketing, Sales & Service (India, SAARC & Oceania), Apollo Tyres Ltd said “We have been working towards development of football at the grassroot level in India, which helps us interact and engage with the community both at the rural and urban centres. Inviting the Manchester United’s U-18 team, which has been identifying and providing a steady stream of players to the United’s first team, to visit India, is a part of our continuous engagement with the Indian football fans”.

In addition to being the Global Tyre Partner of Manchester United Football Club, Apollo Tyres, in India, has a presence in Indian Super League (ISL), being the principal sponsor of Chennai in FC, and in the I-League, with its title sponsorship of Punjab FC, while in Hungary, the company has an association with DVTK, the leading sports club in the country.