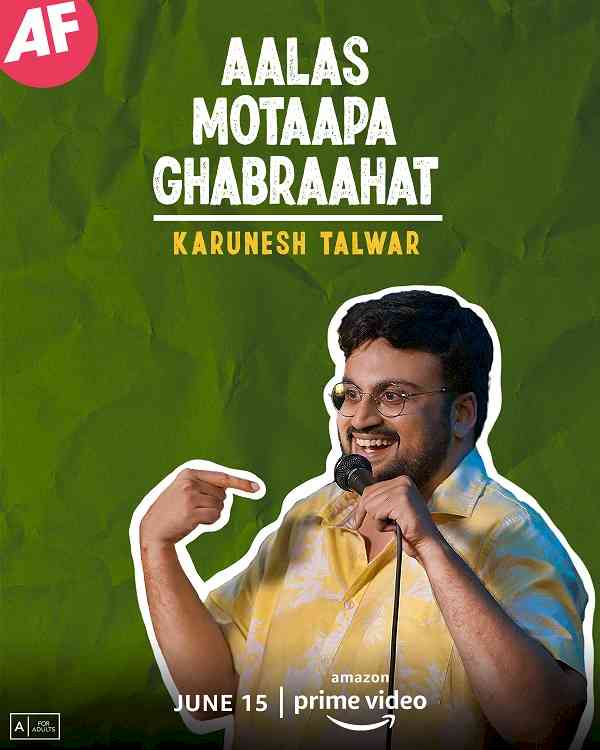 Mumbai: If laughter is the best medicine, Amazon Prime Video sure has the perfect dose of comedy lined up for its viewers. Adding yet another title to their Amazon Funnies slate, the streaming platform today announced the stand-up special Aalas Motaapa Ghabraahat that features popular stand-up comedian Karunesh Talwar. The upcoming offering is Karunesh Talwar’s second stand up special with Amazon Prime Video after his hilarious Pata Nahi Par Bolna Hai that left the audience in splits. Looking to have the same effect this time around as well, the upcoming side-splitting and humorous act by Karunesh Talwar promises to make viewers, across the globe, roll on the floor in laughter on the back of his rib-tickling jokes and on-screen presence. The stand-up special sees him talk all about the relationships that he shares with his parents & girlfriend, his attempt towards being more self-aware, and the fact that we’re all just modified versions of our parents.

Karunesh Talwar, stand-up comic artist said, “I’m returning to Amazon Prime Video for my second special, ‘Aalas Motaapa Ghabraahat,’ and it’s incredibly exciting to be back on the platform, especially after all the love and support I’ve received for the first special. In these unique and difficult circumstances that have prevailed over the past year and a half, it’s an enormous privilege to even get to do stand-up, let alone put out a comedy special. I’ve tried to stay authentic and true to myself, and said what I think is funny. I hope the viewers at home enjoy it as much as the live audience did. It’s about topics pretty much anyone can relate to, because even though we’re all different, I think many parts of the human experience are similar for almost everyone. I’m immensely grateful for the opportunity to do this, and I hope the viewers love the show.”

Mouni Roy to scorch your screens with Bhushan Kumar's T-Series’...

My childhood fantasies are coming true with my role in...